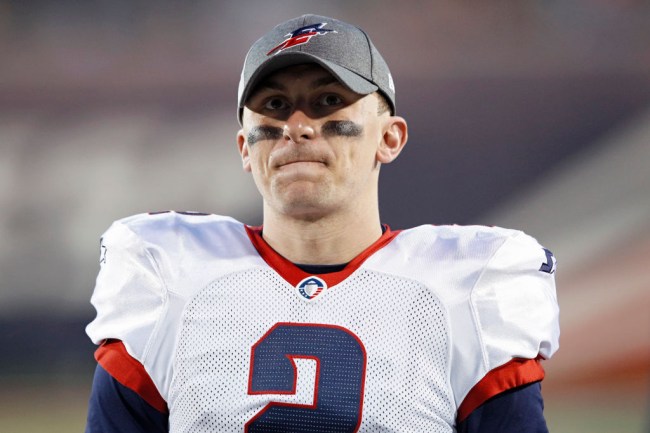 The football world may never see a draft bust who will burn out in a more spectacular fashion than JaMarcus Russell, whose career barely made it off of the runway before it crashed and burned thanks in no small part to his decision to prioritize consuming copious amounts of cough syrup over a contract featuring almost $37 million in incentives that went almost entirely unclaimed.

However, Johnny Manziel made a pretty valiant effort to outdo Russell when he was drafted by the Browns in 2014, as he became one in a long line of people to fall victim to the curse of being a quarterback in Cleveland and had an impressively steep fall from grace that resulted in him being essentially banished from the NFL after a whopping two seasons.

After disappearing from the public eye, he eventually emerged and announced his intention to return to football by ushering in #ComebackSZN but ultimately had about as much luck putting his life back together as someone trying to assemble a desk from IKEA who misplaced both the directions and the Allen wrench that came with it.

The CFL eventually agreed to give Manziel another shot but it didn’t take long for him to get exiled from yet another league after he was booted for violating the rules of his contract. He did get some good news when he managed to find a home in the Alliance of American Football, got some not-so-good news around a week later when his wife left him, and suffered yet another setback shortly after when the AAF ran out of money and ceased to exist.

There was a glimmer of hope for Johnny Football in the form of the XFL but nothing ever came to fruition, and back in February, he said he wasn’t actually interested in playing anymore.

Now, it looks like he’s put the final nail in his own coffin based on what he recently told to The Lubbock Avalanche-Journal, as he revealed his playing days are essentially behind him while reflecting on his current situation, saying:

“In the past, probably, is the way I’d characterize it. I’ve finally got to a point where I’m trying to achieve happiness in life, not happiness on the football field.

I know a lot of people probably want me to come back and play and give it another chance, but I don’t know, as far as being a person and figuring out life as a young adult — trying to make it and figure it out — if I’ve ever been in a better place than I’m in right now. I can honestly say I’m happy and I’m doing the right things to try and put a smile on my face every day, and that means more to me than going out and grinding on a football field.”

It might be fairly easy for him to no longer focus on football when you consider he doesn’t really have any options left, but regardless, removing what is likely the biggest distraction from his life is probably for the best when it comes to getting his personal affairs in order.

R.I.P. #ComebackSZN. You may be gone but you will never be forgotten.