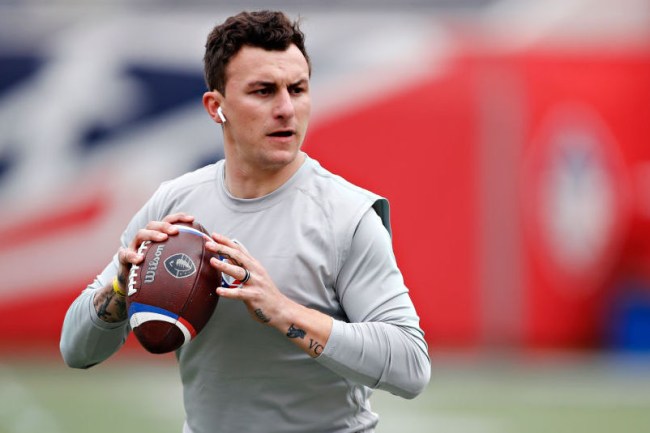 It’s been a couple of years since Johnny Manziel announced #ComebackSZN was officially underway as he geared up for a second act after he crashed and burned in spectacular fashion following a tumultuous two-year stint with the Cleveland Browns that came to an end when he was released in the wake of a number of off-the-field problems.

After it became clear a return to the NFL was out of the question, Johnny Football turned his attention to the Great White North and ultimately signed a contract with the CFL’s Hamilton Tiger-Cats. However, he never played a snap for them before he was traded to the Montreal Alouettes and ultimately found himself in search of a new home when he was banned from the league entirely after violating the terms of his contract.

Manziel—who acknowledged he had no one to blame for his woes but himself—then turned his attention to the Alliance of American Football and landed a job with the Memphis Express, where he played until the league suddenly shuttered and once again found himself out in the cold.

It appeared the only real option left on the table for the embattled quarterback was to take his talents to the XFL and there were rumors he might reunite with his former CFL coach when the league officially rebooted.

However, last year, it became clear Manziel was facing an uphill battle thanks to both the impressive amount of baggage he has and his overall skill set, as one XFL executive suggested he’d be a locker room cancer and commissioner Oliver Luck bluntly stated he doesn’t think he has the talent to compete.

That didn’t stop Manziel from shooting his shot on Twitter over the weekend when he implored Luck to send a contract his way before promptly deleting his account.

Oliver Luck. If ya wanna boost your ratings to another level just send me the contract tomorrow and we’re in there. Like I said YEARS ago… XFL2020 give the people what they want

However, Manziel suddenly resurfaced on Saturday night and played the “It was just a prank, bro!” card when he revealed he currently has no interest in returning to the game.

Have zero desire to play any football these days. Just love stirring up controversy.

Manziel may have no interest in the XFL (or any type of football for that matter) and it seems the feeling may be mutual. With that said, there’s little doubt he’d generate a ton of buzz if he did indeed land a contract.

The league seems to be fairing pretty well so far but it also appears attendance and television numbers are dropping slowly but steadily so I’d be fairly surprised if both parties don’t reevaluate their stance at some point in the future.