Johnny Manziel Gets Real About Ending Up In The Alliance Of American Football: ‘I’ve Been A Very Bad Person’ 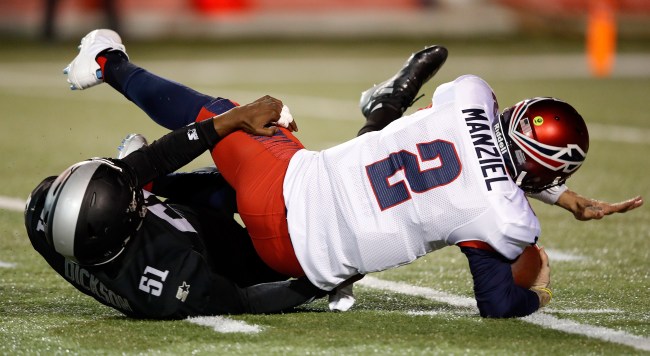 Doesn’t it seem like Johnny Manziel should be older than 26-years-old by now? It just feels like it’s been a decade or so since JFF was picked in the first round by the Cleveland Browns in the 2014 NFL Draft.

Two years at Texas A&M. Two years in Cleveland. Two years playing no football whatsoever. Two games in the Spring League. Half a season in the CFL. And now, on Sunday, Manziel played his first game for the Memphis Express of the Alliance of American Football. There’s been a lot of drama packed into those seven years.

Amazingly, his AAF debut wasn’t even the biggest news surrounding Manziel this weekend. The biggest story surrounding JFF was his wife Bre Tiesi leaving him and saying on Instagram that he “betrayed her” and that “vows were broken.”

Anyhoo, while knee deep in the aftermath of that Johnny Football was back on the gridiron on Sunday.

Johnny Manziel is in at QB pic.twitter.com/xeLc7E3mZi

HERE'S JOHNNY. @JManziel2 now under center for the @aafexpress on @nflnetwork 📺. pic.twitter.com/0FWDaDh5BE

Before that, however, Manziel did an interview for The Alliance in which he addressed his “multitude of mistakes” and why he thinks he was able to sign with the AAF so quickly after being banned from the CFL.

“I’ve been a very bad person at times and I’ve made a lot of mistakes that I’m not proud of whatsoever,” Manziel admitted during the interview.

This week, Memphis Express QB @JManziel2 opened up about his journey to The Alliance. pic.twitter.com/GyFiv2wNYs

Manziel ended up going 3-for-5 for 48 yards in his debut, but was outshined by Memphis’ latest starting QB Brandon Silvers who went 24-for-35 passing for 266 yards and two touchdowns as the Express won 31-25 in overtime.

However, it wasn’t Silver who was featured on the NFL’s YouTube page as it was Manziel who got his own video compilation of every run and throw from his AAF debut.