Where Is Johnny Manziel Going To Play Now That He’s Banned From The CFL? Here Are The Official Odds 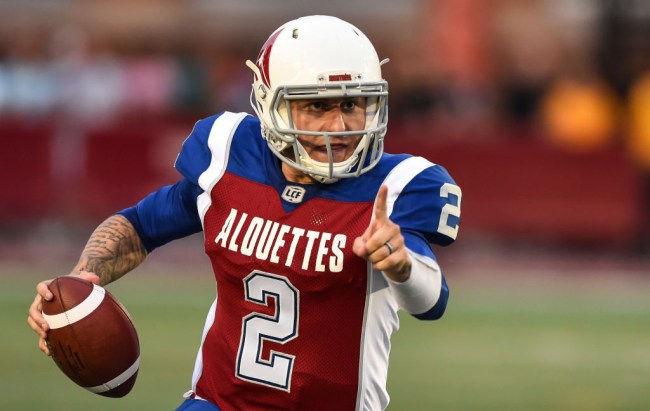 Last year, ComebackSZN officially commenced when NFL burnout Johnny Manziel signed a deal with the CFL in the midst of an ongoing battle with mental health and substance abuse issues. It was a big step forward for the quarterback, who had visions of eventually making it back to the NFL after getting redemption in the Great White North.

After signing a deal with the Hamilton Tiger-Cats, Manziel was eventually traded to the Montreal Alouettes, where he got off to a freezing cold start by throwing four interceptions in the first half of his debut and getting absolutely trucked in his second game.

Johnny Manziel takes a big hit to the head, is clearly woozy, so they rubbed his neck and he missed exactly zero plays. pic.twitter.com/0HyvCIlXyv

All mediocre things must come to an end and that’s exactly what happened on Wednesday when Manziel was released by his team and banned from the league entirely under some suspicious circumstances.

After the news broke, Manziel issued a short statement on Twitter thanking those who supported him during his time in Canada and said he’s already planning on exploring his options back on his home turf.

I want to thank Coach Sherman, my teammates, and the CFL fans. My time there reestablished my love for the game of football and the work that goes into it. I look forward to exploring new options within the United States.

Luckily for Johnny Football, he has a couple more options in America than he did when he left. The AAF is currently in its first season and the XFL—which reportedly wanted to make Manziel the face of the league when its revival was announced—is gearing up for an inaugural season of its own in 2020.

As of right now, nobody—including Manziel himself—knows where the fallen star is going to end up, but if you think you do, you can feel free to put your money where your mouth is thanks to OddsShark, which released the odds concerning the next stop on the quarterback’s journey.

Odds for what league Johnny Manziel will play in for his next professional football game:

I’m not touching this one, but if Vince McMahon can get Manziel and Colin Kaepernick to sign, the XFL will have my attention.