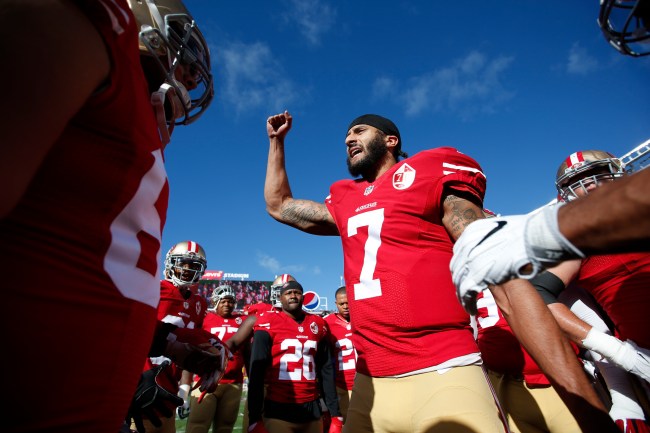 Colin Kaepernick hasn’t played in a pro football game since 2016 when he was a member of the San Francisco 49ers, but, according to new reports, that all may change in the near future. It might not be with an NFL franchise, though — which is where some think the quarterback could end up getting another chance — but, instead, with the new XFL, which is scheduled to kick-off in February 2020.

In an exclusive interview with the Sporting News, a spokesperson for the WWE-owned XFL has confirmed that there have been discussions with Colin Kaepernick about the signal-caller joining the league. The asking price from Kaepernick, who just, reportedly, won millions in his settlement regarding a collusion case with the NFL, is believed to be $20 million.

An XFL spokesman confirmed to Sporting News on Monday that Kaepernick talked with executives about joining the league this past fall.

The XFL declined to divulge details of the Kaepernick contract talks. But sources said the former 49ers quarterback wanted at least $20 million to suit up for new spring football league. Mark Geragos, Kaepernick’s attorney, did not return an email from SN seeking comment.

The news of Colin Kaepernick, allegedly, being in talks with the XFL follows a report from a few weeks ago that came out saying he had done something similar to join the new Alliance of American Football (AAF), which kicked off several weeks ago. It was believed that, like the XFL reports, Kaepernick was seeking a $20 million contract.

Unfortunately, unless Colin Kaepernick lowers his contract demands, it seems far-fetched that an offer will be waiting for him in the XFL. That’s because, per the Sporting News report, the XFL’s founder, Vince McMahon, is seeking to pay each quarterback of the eight-team league an estimated $250,000, which is clearly way below Kaepernick’s request of $20 million.

While Colin Kaepernick may not have been the talk of pro football only a few months ago, since the Super Bowl ended, it seems like it’s all anyone’s talking about. From his settlement with the NFL to reports of him, potentially, getting another chance in the NFL, it seems like everyone’s anticipating Kaepernick’s next move — but, even with these most recent reports about him expressing interest in the XFL, it doesn’t seem likely that the revamped league will be his landing spot.