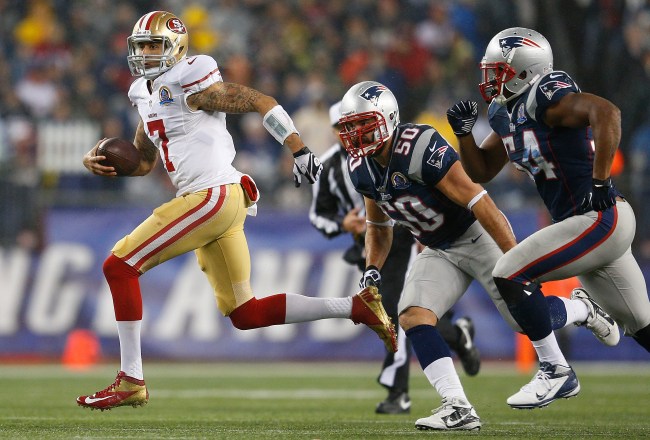 There are certain questions that are able to incite people unlike any others, like “Does pineapple belong on a pizza?” and “Is a hot dog a sandwich?”

I don’t see myself ever being presented with the opportunity, but if I was ever offered $1,000 to see if I could make at least a couple of people in a room full of NFL fans throw blows over a single debate, I wouldn’t think twice about the question I’d pose: Should Colin Kaepernick be playing in the NFL?

In 2016, most people stopped paying attention to what the former 49er was doing on the field and instead started focusing on what he was doing on the sidelines when he decided to start kneeling during the national anthem to protest police brutality in the United States.

Depending on what camp you fall in, Kaepernick’s protest was either an encapsulation of the freedom and rights that make this country truly great or the equivalent of him lighting an American flag on fire and putting it out by pissing on it.

That debate has continued to rage over the past few years after Kaepernick became a free agent and was unable to find a new home in the NFL—a league where 95 percent of players believe he should be on a roster.

Kaepernick would eventually file a grievance against the NFL, accusing its owners of colluding to keep him out of the league. After more than a year, the two parties finally settled the dispute for an undisclosed sum that’s probably a bit more sizeable than the $20 million AAF contract he was lobbying for.

Now that both parties have settled their differences, plenty of people think it’s only a matter of time until Kaepernick returns to a real league and are already predicting potential destinations—including Cris Carter, who theorized the 31-year-old quarterback could become Tom Brady’s successor in New England.

However, he’s not the only person making that prophecy.

Over the weekend, Kaepernick’s attorney Mark Geragos offered his thoughts on the topic and says there are two teams he thinks could reach out to his client sooner rather than later:

“You want me to predict who?” he asked. “Besides the Panthers, it would not surprise me if Bob Kraft makes a move.”

It’s worth noting Geragos speculated Kaepernick would be picked up last season—a prediction that didn’t come to fruition—but the Patriots were also reportedly in the conversation at the time.

When you consider Kraft is making a push to fight social injustice there’s a chance the Patriots might have finally found the replacement they’ve been looking for—assuming Brady retires before Kaepernick does.