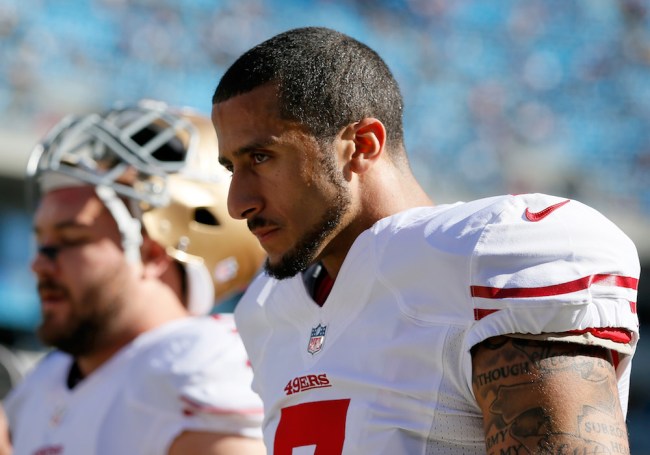 Colin Kaepernick hasn’t stepped foot on the gridiron since the 2016 season, a year after he rustled a fair amount of jimmies by sparking a movement when he decided to start kneeling during the national anthem in protest of police brutality.

This decision kicked off quite the saga, as Kaepernick was unable to find a new home after opting out of his contract with the 49ers, which was kind of suspicious when you consider Blaine Gabbert is still somehow signed to an NFL roster.

Rumors began to fly that the quarterback had been blackballed from the league in a vast conspiracy that some people theorized stretched all the way to the President of the United States.

It took a while, but Kaepernick recently burst back onto the scene in a big way after Nike revealed he’d be the face of their 30th-anniversary ad campaign.

People responded appropriately to the news and by that I mean they decided to burn Nike gear they’d already dropped money on in protest.

Shortly after the announcement, Nike dropped an ad that was seemingly designed to piss off his detractors even more.

Kaepernick has also been busy fighting a court battle concerning the alleged collusion that’s kept him out of the league for so long, but if his lawyer is to be believed, it could only be a matter of time before he returns to the football field.

TMZ Sports caught up with Mark Geragos, who hinted there are at least two teams who have expressed interest in signing the QB.

Geragos tried to be cryptic, but based on his comments, Kaepernick could be headed to the Raiders or backing up Tom Brady in New England in the near future.

It’s worth noting Geragos said his client would be signed to an NFL team within ten days almost a year ago so it might be worth taking his word with a block of Himalayan rock salt.

With that said, if Nathan Peterman can score a starting job in the NFL, I don’t see any reason why Kaepernick couldn’t at least be a third-string quarterback.