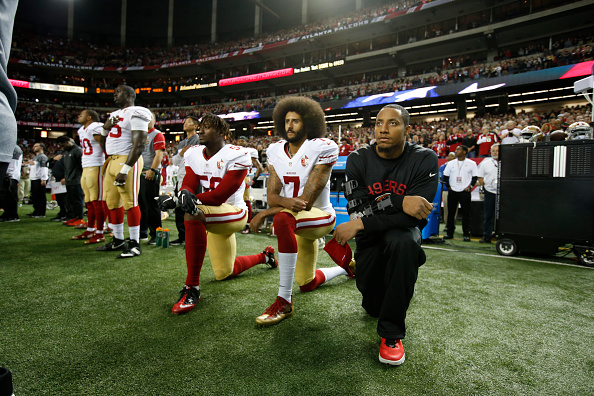 This afternoon Nike revealed that it had re-signed controversial football player Colin Kaepernick, who is currenly suing the NFL for colluding to keep him out of the league after he knelt during the anthem to protest social injustices in the U.S., to feature him in the company’s 30th anniversary marketing campaign.

Kaepernick’s deal with Nike is reportedly a deal that would give a “star player” and is worth millions of dollars.

Details on Kaepernick and #Nike:

– It’s wide endorsement. He’s going to have his own branded line. Shoes, shirts, jerseys, etc. There will be Kaepernick apparel.

– Contract is a “star” deal on par with a top end #NFL player. Millions per year. Star deals also include royalties.

While several people have commended Nike for standing with Kaepernick, others who have been vocal about their displeasure with Kaepernick’s protest took to Twitter to protest Nike by cutting and burning their Nike gear.

Here is some of the praise Nike/Kaepernick is getting.

Colin Kaepernick drew our collective attention to the problem of continued racial injustice in America. He did so not to disrespect our flag but to give meaning to the words of the preamble of our Constitution—“in order to form a more perfect union.” Well done, Colin, well done. https://t.co/4ALyUxLjM5

dear @Nike i appreciate you for standing with @Kaepernick7 https://t.co/KEvLlzeGGV

And here is the backlash to the Kaepernick signing.

Our Soundman just cut the Nike swoosh off his socks. Former marine. Get ready @Nike multiply that by the millions. pic.twitter.com/h8kj6RXe7j

.@Nike Due to your support of C.K. in your coming adds, I as an American can no longer support your company. #boycottNike #IStandForOurFlag pic.twitter.com/5JxSMD8SSO

The Kaepernick debate isn’t going to end anytime soon and I highly doubt that Nike cares about whatever backlash they get from signing Kaep to a multi-year deal.