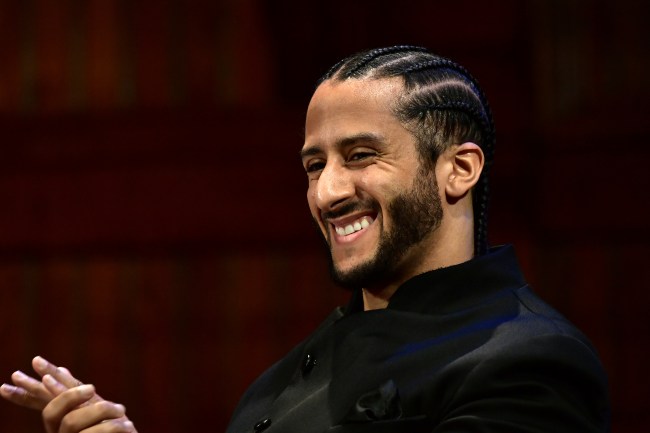 Colin Kaepernick hasn’t played in the NFL since the 2016 season and, for all intents and purposes, isn’t close to joining a team anytime soon given his filed grievance against the league and his desire to continue to kneel during the National Anthem as a quiet protest. Still, that hasn’t stopped FOX Sports’ Cris Carter from thinking that there’s at least one team who might be interested in the former San Francisco 49ers’ quarterback — and it’s the reigning Super Bowl champion New England Patriots.

Talking on FS1’s First Things First, the Hall of Fame wide receiver, Carter, offered up some reasons why the name Colin Kaepernick is one to follow when it comes time for the Pats to consider a replacement for Tom Brady — even though that seems years away, with Brady himself saying he wants to play till he’s 45. The six-time Super Bowl winner is currently 41.

Here’s what Carter had to say about the possibility of Kaepernick joining the Patriots, though.

"The replacement for Tom Brady might not come from the draft. I wouldn't be surprised if the Patriots looked at Kap. The Krafts are very, very fond of Colin Kaepernick. If someone will do it, it will be the people in New England." — @criscarter80 pic.twitter.com/sVZnbrLiVK

Not sure what prompted Cris Carter to such a hot take this morning, but it seems a little off-balance considering no NFL team has seemed to show interest in Colin Kaepernick for at least the past couple years. So to think that the most successful pro sports franchise would suddenly replace a legend like Tom Brady with a guy who hasn’t read an NFL defense in three years sounds absurd.

Still, if any NFL team was cocky, confident and narcissistic enough to make something like this happen, it’s the New England Patriots. Remember, lost in all of their success over the past 19 years, is the fact that they’ve taken so-called malcontent’s from other teams to rehab them into stars. Names like Randy Moss, Aquib Talib and, more recently, Josh Gordon come to mind. But would they really take a chance on Colin Kaepernick? Guess time will tell us.

Cris Carter did give the caveat that he doesn’t have any insider info, so this is strictly a personal opinion based off of, per Bleacher Report, “what he knows about the Kraft family’s stance on the controversial star.” Pats owner Robert Kraft might respect Kaepernick, but it’s a whole different animal when talking about adding him to the roster to learn behind Brady.

According to a former New England Patriots assistant, Jerry Schuplinski, the team evaluates its quarterbacks more for their mental abilities than their physical ones. And, while Colin Kaepernick is a freak athlete, one has to wonder if his final season in the NFL — where he threw of 16 touchdowns, 4 interceptions, 2,241 yards and led the Niners to a paltry 1-10 record — fits that mold or not, especially after being out of the league for so long already. Is that more on the quarterback, who put up OK numbers on a bad team, or a product of a bad supporting cast?