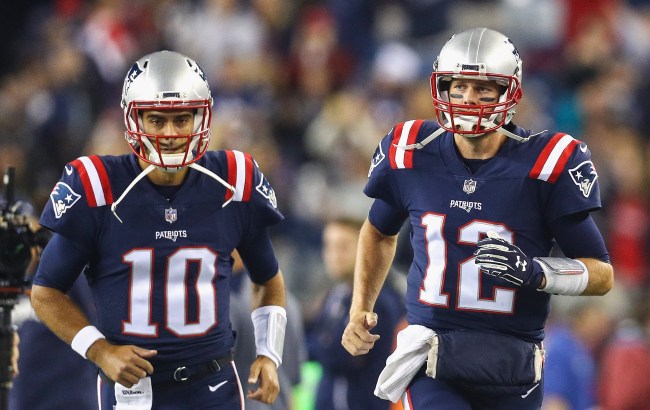 The New England Patriots have been #blessed to have Tom Brady under center since they took a chance on him with the 199th overall pick in the 2000 NFL Draft. All Tom Terrific has done since is win six Super Bowls, making the franchise the gold standard when it comes to success in pro sports.

While nobody could’ve predicted that Brady would become the GOAT way back then, considering the New England Patriots still had head coach Bill Belichick at the helm when the team selected the quarterback, there was a system and process in place as to what intangibles scouts and coaches should look for in a signal-caller. And, according to a former New England assistant coach, Jerry Schuplinski, those requirements haven’t changed.

Talking to MassLive‘s Andrew Callahan, per SB Nation, Schuplinski, broke down exactly what the New England Patriots look for when it comes to scouting a quarterback. As you might imagine — especially with all the success the team has had since Tom Brady and Bill Belichick teamed up, it takes more than having physical tools to play in Foxborough.

Per the MassLive piece, here’s what Schuplinski had to say:

“Outside of the physical fundamentals of the game, it’s the intelligence factor and the commitment factor it takes to be successful,” Schuplinski said. “It’s not just about knowing our offense and knowing our playbook. It’s more so knowing the defense; what they’re doing, how are they aligning, what kind of information we can gather from the defense — coverage indicators and things of that nature — and how we can use that information and use their strengths and weaknesses to execute better.”

Sure, that could just be “coach speak” from Schuplinski, but if you’ve ever wondered why Tom Brady has looked so comfortable sitting back there and standing tall in the pocket, it’s because he’s making reads before the snap based off defensive alignments, so he’s able to go through his progressions. It’s also why we’ve seen other quarterbacks, like Jimmy Garoppolo, have success in the New England Patriots’ system over the years.

With all that said, it’s not easy for scouts and coaches to evaluate someone’s mental capacity. If it were, every NFL team would be as successful as the New England Patriots. So here’s how Jerry Schuplinski said the Pats try to go a little bit deeper in evaluating a quarterback.

“What’s important to us is we need to put them through a pretty decent grind when we meet with them. We need to put them through some stuff — it doesn’t necessarily have to be their (plays) per se — but we want to teach them something and see how they learn it,” Schuplinski said. “Teach them something, then test them on it and see how their retention is. And that’s usually a relatively good indicator.”

”It doesn’t tell us automatically whether this guy’s got it, but we’ll know if he doesn’t have it. And if he does, we’ll know he has a chance.”

It’s simple to point to Tom Brady and say that the New England Patriots just got lucky catching lighting in a bottle back in 2000, and that they’re no different than any other NFL franchise in what they look for in a quarterback. But with success of some other guys who have shown that they’re mental abilities outweigh their physical abilities — like Garoppolo, Jacoby Brissett and current backup Brian Hoyer — it’s easy to see why there’s the “Patriot Way,” and then there’s whatever way everyone else is doing.