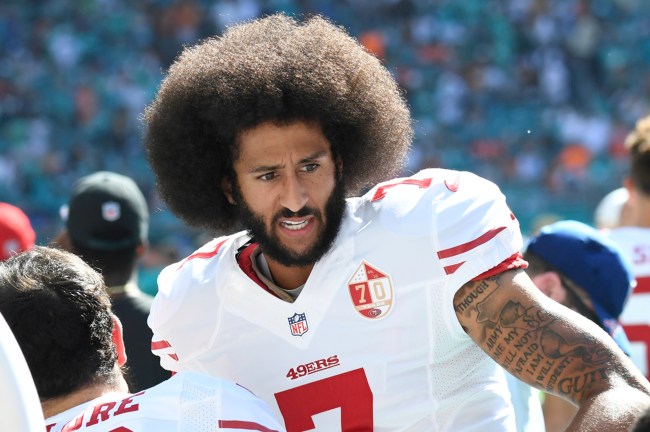 Colin Kaepernick hasn’t played in the NFL since the 2016 season with the San Francisco 49ers, but even after he settled with the league on his collusion case last week — in which some reported he earned millions from — the quarterback is still hoping for another chance of playing in the league again one day. And, from at least one report, now that Kaepernick reached that settlement regarding his grievance, the opportunity may be even greater that he gets the chance.

According to Mike Freeman of Bleacher Report, with the player no longer embattled in a lawsuit with the NFL, owners may be more willing to give him a call to try and make a roster. Here’s what Freeman wrote in one of his recent columns regarding the Kapernick situation.

If there is one big takeaway from the news that Colin Kaepernick and the NFL settled their collusion case, it is this: The chances we’ll see Kaepernick back on an NFL sideline are higher now than at any time since he opted out of his deal with the Niners almost two years ago.

The fact that the odds are above zero is remarkable since not long ago it appeared virtually impossible that he’d be back in the NFL, not with the attention his stance for social justice drew or with a standing lawsuit against the league.

And while the end of that suit will allow Kaepernick to pursue a return to the league with a lot less rancor in the air, an equally important development is the fact that the NFL no longer has reason to fear repercussions from President Donald Trump.

It’s interesting that Mike Freeman mentions Donald Trump in his theory as to why Colin Kaepernick could return to the league, as the President was one of the most outspoken opponents to the signal-caller, among others, taking a knee during the playing of the National Anthem. With the bad press surrounding such an issue, seemingly, in the rearview mirror, Kaepernick’s football days may have been resuscitated.

There are some out there who think Colin Kaepernick gets a chance with either the Carolina Panthers or even the New England Patriots — according to Kaepernick’s lawyer — but until an NFL owner actually picks up the phone to call Kaepernick, it’s all just chatter. It’ll be interesting to see if anything comes to fruition, or if this is all just relevant news now following the NFL’s settlement with the quarterback. Guess we’ll just have to stay tuned to find out.