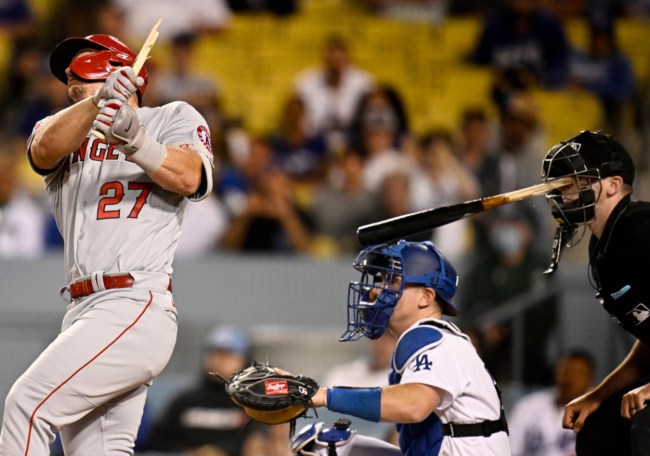 Trout reached on a single, but as soon as he heard the broken bat hit Tomlinson’s mask, his concern wasn’t reaching first base. You can tell just after impact that Trout was worried about the home plate umpire.

The broken piece of the bat somehow perfectly, and unfortunately, fit between the two bars on the facemask and cut him in the face. Thankfully, the broken bat didn’t catch Tomlinson in the eye, which would have turned a bad situation into a real nightmare.

According to USA Today’s Bob Nightengale, Tomlinson was taken to the emergency room after the ball cut his face just above his eye and nose.

Home-plate umpire Nate Tomlinson was taken to the emergency room Tuesday night after being struck in the face by Mike Trout's broken bat, with a piece flying between bars of his mask, cutting his face just above his eye and nose. He managed to avoid serious injury, his crew says.

Typically, a broken bat launches forward into the field of play, but this was certainly a freak situation with the piece of wood somehow finding its way inside Tomlinson’s cage.