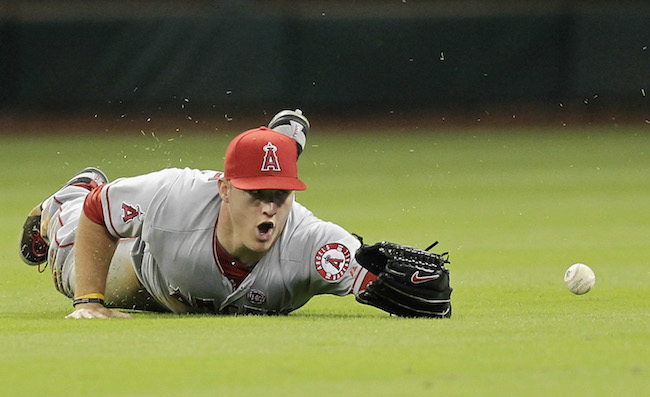 Just seconds after giving the polar opposite of Herb Brook’s Miracle! speech to his cartoon teammates during halftime of the legendary game chronicled in the 1996 documentary Space Jam, Michael Jordan teamed up with Bugs Bunny to put the power of the placebo effect to the test when the duo encouraged the rest of the TunesSquad to chug down a bunch of “Michael’s Secret Stuff” in a last-ditch attempt to avoid being eternally enslaved by aliens.

Thanks to the help of some Psych 101 (and the total disregard of everything that’s taught in Physics 101), the good guys managed to come away with the second-most improbable second-half comeback in the history of sports. It’s been over 20 years since the Monstars were exiled back to Moron Mountain, but the movie went on to inspire an entire generation of athletes who still use it for motivation to this day.

One of those athletes is Mike Trout, who is doing everything in his power to unseat Tim Salmon in his quest to go down in history as the best baseball player who shares a last name with a type of fish. The eight-year veteran has hit nine home runs so far this season, and on Saturday, a camera caught him drinking from a bottle in the dugout labeled “Michael’s Secret Stuff” that could help explain his dominant performance.

The best player in baseball Mike Trout, hit a home run, walked in the dugout and drank from a bottle that said "Mike's Secret Stuff". I wish baseball knew how to market their players because he is so swaggy. pic.twitter.com/8rnl2rm3mq

Larry Brown Sports points out Trout was spotted holding the bottle earlier this month, and there’s a chance he could have taken some inspiration of his own from Jacksonville Jaguars cornerback Jalen Ramsey, who has a slightly more legit bottle sitting in his locker. Based on their respective performances, maybe these guys know something that we don’t.