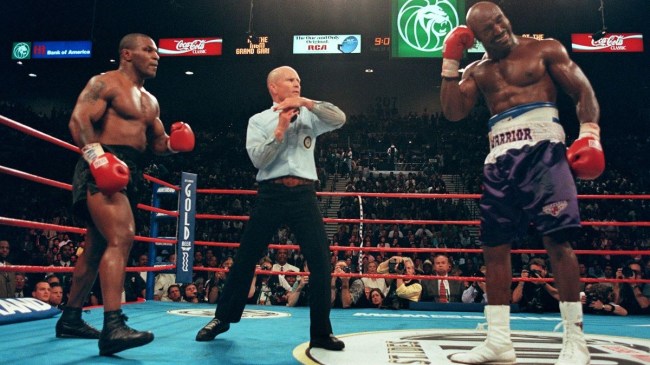 Mike Tyson and Evander Holyfield haven’t always been the best of friends. And no one could blame Holyfield after Tyson infamously took a chunk of his ear off with vicious chomp during the second fight between the two.

Tyson was eventually disqualified after taking a second go at Holyfield’s other ear later in the bout. It’s one of the most iconic, yet infamous moments in boxing history. The fight still worked out for Tyson, who walked away with a cool $30 million. Though he and Holyfield have been at odds ever since. But now it appears that’s all water under the bridge.

Today’s Tyson cuts a much different figure than the hardened, borderline-crazy boxer that ruled the ring. He’s now a weed-smoking pacifist who hosts a popular podcast and often worries about his own impending death. Tyson is also a movie star and a businessman. One of those business ventures is a cannabis company that is profiting off Tyson’s bite against Holyfield by selling ear-shaped edible gummies.

Holyfield wasn’t amused by the idea at first. But now it appears he’s all the way on board.

Holyfield hasn’t just given Tyson his blessing to sell the edibles, he’s actively promoting the product and plans to release his own line of cannabis in 2023.

New: Mike Tyson and Evander Holyfield have partnered up to create and deliver “Holy Ears,” edibles in the shape of an ear

“If i was on cannabis, I wouldn't have bit his ear,” Tyson said, referring to the 1997 fight when the boxer bit Holyfield’s ear pic.twitter.com/WNjdi5Tnlz

“I didn’t think it was funny at first, but then I realized Mike hadn’t been in more trouble for a while,” Holyfield told HuffPost, adding that he appreciated how Tyson was helping people with his products.

Holyfield admitted he hadn’t tried cannabis until he got his first Holy Ears sample.

“I wanted to make sure I got home and didn’t do anything to anyone,” he said.

“I ate it and laid down. I woke up the next morning and was like, ‘Whoa.’” – via Huffington Post

The two now come together to sell the new Holy Ears line of THC- and Delta-8 THC-infused edibles through Tyson’s cannabis company, Tyson2.0. Because nothing brings people together like the holidays.