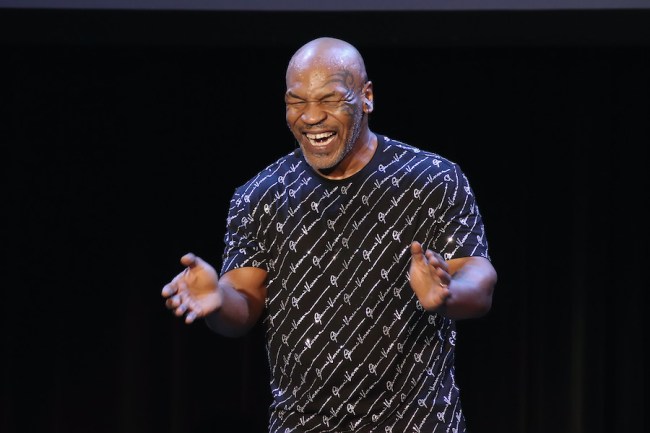 The former world champion promises to hold nothing back – including his punches – in the exhibition event.

Tyson is certainly not holding anything back in the interviews promoting the event. Tyson was a recent guest on the HotBoxin’ podcast with the UFC’s Vice President of Athlete Health and Performance, Jeff Novitzky.

Tyson admitted to using a Whizzinator and filling it with his wife’s urine, and then his kid’s urine because he was afraid the pee results would show he was pregnant.

Tyson: “It was awesome, man. I put my baby’s urine in it. And sometimes, one time I was using my wife’s and my wife was like ‘Baby you better not hope that it comes back pregnant or something.’ And I said nah, so we ain’t gonna use you any more, we’re gonna use the kid. ‘Cause I got scared that the piss might come back pregnant.”

Novitzky: “I think that’s happened before. A male provided a urine sample and it came back and they said ‘Sir, you’re pregnant. Either you’re pregnant or this is somebody else’s urine.’”

Novitzky: “Did you have the right color whizzinator? Because there was that NFL guy last season with a white one.”

Tyson: “Yeah, hell yeah, I had a brown one. This guy was so f—king macho, he was scared. I whipped it out and he was like turning, ‘Hey man take the f—king cup.’ This macho guy, he didn’t want to look at me and s—t.”

Tyson is presumably talking about drug testing during his days abusing cocaine and weed.

In his 2013 book, “Undisputed Truth,” Tyson admitted to using the Whizzinator for most of his boxing entire career to mask his drug use.

He also admitted to being high during more than a few fights.