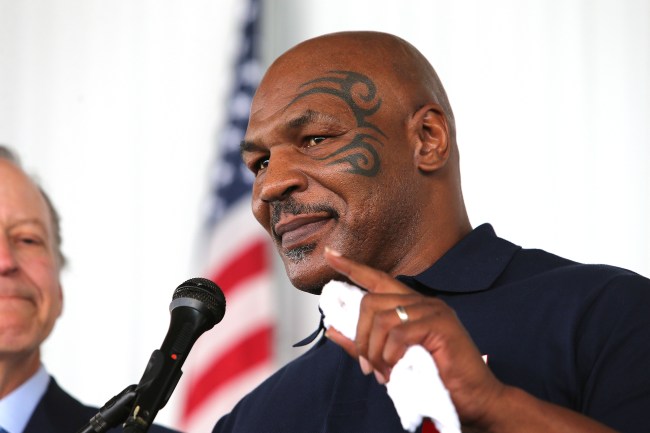 Mike Tyson was once one of the baddest men on the planet, as he was actually feared by other guys who immediately regretted walking into a ring with him. The former world heavyweight champion of the world has undergone a bit of a transformation in the past decade or so, but don’t be mistaken, the guy could knockout a steel plate back in the day; presumably.

With all the fame and money that Mike Tyson earned during his boxing career, he was well-known for blowing it on a bunch of different things. Mansions, trips, jewelry, cars; you name it, Mike Tyson could buy it. And, the things he was buying back then weren’t exactly cheap.

Famously known for having pet tigers at one point in his life, Iron Mike joined The Joe Rogan Experience podcast to talk about how he ended up with cubs in the first place. And, in true Mike Tyson fashion, the story is as interesting as he is. Take a look at what Tyson talked about in the video below.

And here’s a transcript of what Mike Tyson had to say, per FTW.USAToday.

Tom Segura: “What made you think you could get a tiger?”

Mike Tyson: “This is really interesting. I’m in prison at the time. So I’m in prison, I’m talking to my car dealer at the time and he has some cars that belong to a [mutual friend], and he’s discussing ‘if he doesn’t pay for these cars, I’m going to sell these cars to somebody and get some horses.’

I said ‘what, you can get horses? And trade horses in for cars?’ Because I had a lot of cars, I’d probably get some horses too.”

And he said ‘yeah man, you can get cougars, lions, tigers…’ I said ‘you do?! Can you get me some tigers?’

The guy said ‘imagine how cool that would be?’ Because I had a bunch of fancy cars, ‘imagine that man, you’d be in an Aston Martin or a Ferrari. You’d have a tiger right next to you, man. That’s be so awesome.’

Yep, dude was trading exotic cars for tigers. If this doesn’t perfectly describe Mike Tyson’s insane spending habits, I don’t know what does. Plus, considering Tyson said in the same podcast that he once owned more than a half-dozen Bentleys, it seems like Iron Mike was living large.

There’s mansion money, there’s Ferrari money, then there’s buying tigers money — and Mike Tyson was ballin’ when it came to that.