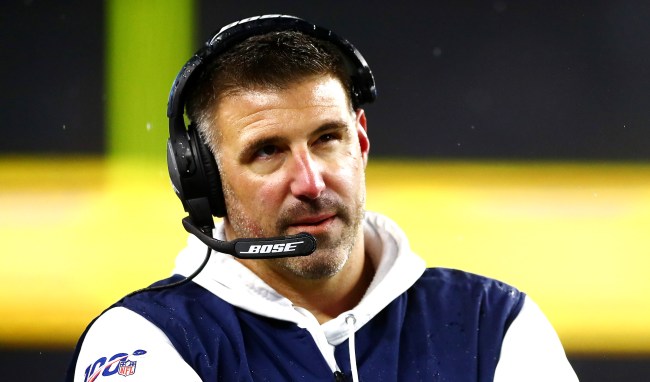 You had Isaiah Wilson’s mom forcibly removing his girlfriend off his lap and tossing her off the couch after he was drafted by the Tennessee Titans.

You had CeeDee Lamb’s girlfriend trying to check his phone during the draft only for him to shut her down.

You had Cowboys owner Jerry Jones looking like his was conducting Dallas’ business from a supervillain lair.

Titans Head Coach Mike Vrabel… with a lip in.. drafts a mammoth OL perfectly tailored to their mauling run game.. his bleach blonde mullet son sporting his Pro Bowl Jersey… his other son wearing an Incredibles Frozone costume. There is your COVID vaccine. Go bottle that up. pic.twitter.com/HgXQcNnnKY

You had one of Vrabel’s son wearing a freaking Frozone costume from The Incredibles, the other looking like Joe Exotic the linebacker, and then there was this…

Someone get caught pooping at Mike Vrabel's draft party? pic.twitter.com/BYpRrtDXoD

Uhhh, who is the guy in the background that appears to be taking a dump?

Turns out, thanks to some sharp investigation, we now know that no one was actually pooping in the background of Vrabel’s draft room, at least according AP football writer Teresa Walker who learned Vrabel’s son Tyler was actually just sitting on a barstool next to his mom, not on the can.

“It’s been a long quarantine over here. We’ve got a bunch of 18 and 19 year old kids but Tyler was not going to the restroom,” Vrabel said after the draft, according to Titans reporter Jim Wyatt. “He was sitting on a stool … not a toilet.”

That mystery solved we can now move on to…

Is anyone going to ask why this kid is dressed as Frozone behind Mike Vrabel or pic.twitter.com/cC6XSnRADD

I cannot wait to see what craziness takes place inside Vrabel’s house during night two of the draft.