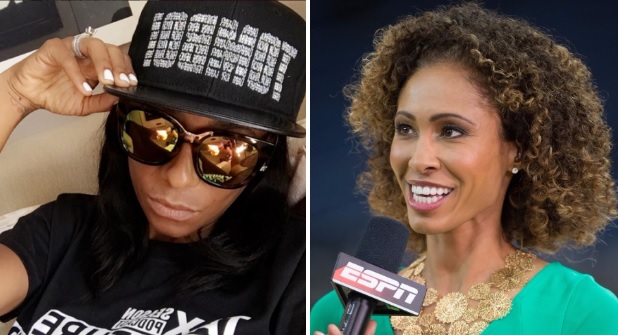 Early this morning, Sage Steele got crushed on Twitter after she publicly whined about dragging luggage “nearly two miles” and having her Super Bowl travel bans messed up because of LAX protesters protesting Trump’s executive order to restrict immigrants from predominantly Muslim countries. .

Miko Grimes, the outspoken wife of Tampa Bay Bucs corner Brent Grimes, tweeted that she wants to step into the ring with Steele over her latest comments.

Sign me and this heffa up on the female card for the Chris Brown & Soulja Boy fight. https://t.co/NavbRpf3GZ

Every time i tweet that hoe she call twitter police &they make me delete it. Just bc i was forced to delete dont mean i didnt mean it hoe!

Ur always behind. U @ Mike Evans on sitting but didnt know saluting the flag was an NFL & Def. Dept scam! Dumbass! https://t.co/NavbRpf3GZ

She hates herself so much! https://t.co/wcRgm3PiaN

I don’t know about you guys but I got my money on Miko.