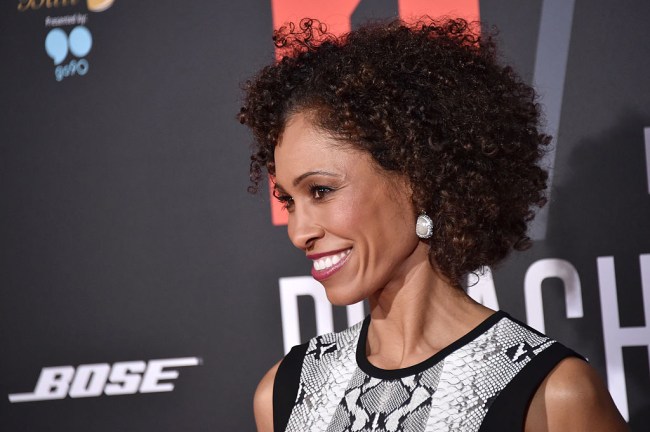 For someone who works in the media ESPN’s Sage Steele sure has found herself catching a lot of heat on social media over the past few months.

Back in November she was on the receiving end of some scathing comments from noted angry person Miko Grimes and others over something she said about the Bucs’ Mike Evans.

Now Steele is once again in people’s cross-hairs after a post she made to Instagram complaining about how protesters messed up her travel plans to Houston and the Super Bowl.

So THIS is why thousands of us dragged luggage nearly 2 miles to get to LAX, but still missed our flights. Fortunately, a 7 hour wait for the next flight to Houston won’t affect me that much, but my heart sank for the elderly and parents with small children who did their best to walk all that way but had no chance of making their flights. I love witnessing people exercise their right to protest! But it saddened me to see the joy on their faces knowing that they were successful in disrupting so many people’s travel plans. Yes, immigrants were affected by this as well. Brilliant.

As one can imagine, THAT did not sit well with many folks on social media.

@sagesteele hey Sage..w/ all due respect..what types of protest do you prefer? The 'disruption' is the point of protest.

@sagesteele As a volunteer attorney who helped reunite a family this past weekend your comments are stunning. Some things are bigger than u.

@sagesteele People standing up for those who are getting their lives damaged by an unconstitutional order is more important than ur travel.

@sagesteele the nerve of MLK to block that bridge in Selma. Didn't he know that he was tying up traffic! What a jerk!!!!

.@sagesteele I'm sure plans back then were disrupted too. Some things are bigger than a missed flight. Sry you had to drag your luggage lol pic.twitter.com/QTqPF9WkUp

@sagesteele Sorry you were inconvenienced. I think it's a safe bet that green card holders who were detained had a worse weekend than you.

@sagesteele 5 year child was detained at an airport, people are being detained at airports across the country, youre late to the Super Bowl🤔

@sagesteele yeah, now carry your luggage 100 more miles, get on a raft and cross a sea and you might start to touch the experience

@sagesteele My client was separated from her fam for more than 24 hrs & her 17-year old daughter handcuffed. Let's compare inconveniences.

" Can you guys move out the way? I got a 3pm appointment."
Sage Steele to the Civil Rights Movement at Selma

"Ma'am we don't have time for this, some of us are trying to get home" – sage steele to Rosa parks

@sagesteele travel disruptions are a luxury problem. A Muslim ban resulting in protest is humanity's problem. One is more important.

@sagesteele cry about it pic.twitter.com/4ApYbItB4c

And it goes on and on and on…

Steele, for her part, did reply. Not very well, but she did reply…

All good! But just bc someone has a different opinion, doesn't mean they're "the worst". Unless, of course, only YOUR opinion is allowed🤔 https://t.co/iiZXuD4Ne2

@TaylorRooks has nothing to do w what I "prefer". Comical to see the process used to determine when it's "ok" to disrupt. It wasn't…

America is so much fun now, isn’t it?