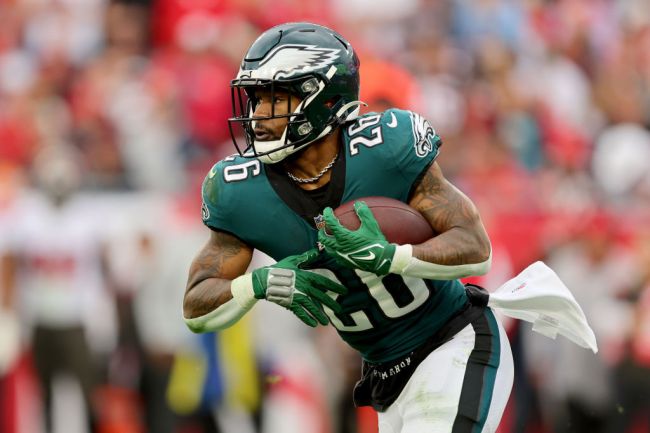 As we get closer to training camp arriving in the NFL, teams around the league are starting to really get a feel for what they may be during the 2022 season. For some, that comes with a lot of confidence in what they can achieve when the upcoming season begins.

That seems to be the case for Miles Sanders. He told CBS Sports’ Cody Benjamin that the Philadelphia Eagles feel like they’re on an all-star team right now.

This is part of a Q&A for @CBSSports. Other highlights:

🟢 He's hosting a free youth football camp at Woodland Hills in July.
🟢 Jokes his mom may play hardball w/ #Eagles in contract talks.
🟢 He'd "love to stay in Philadelphia" beyond 2022.

Oh man. We all feel like we’re on an all-star team, so we feel great. We feel unstoppable, I’m not gonna lie. The vibes are great, always have been. Nick Sirianni is doing a great job just keeping the vibes right, the chemistry good. We compete a lot in practice. But we’ve gotta see. It’s gonna come down to camp, taking it day by day, putting everything together.

This quote sounds a bit like that time Vince Young referred to the 2011 Eagles as a “Dream Team”. That team was coming off of a 10-6 season and made key additions in Nnamdi Asomugah and Dominique Rodgers-Cromartie and the defensive side of the ball.

Unfortunately for Young and that Eagles squad, they wouldn’t come close to living up that “Dream Team” label and would finish the season 8-8, missing the playoffs.

Sanders and this year’s Eagles will be hoping to avoid a similar fate after making the playoffs at 9-8 last season.

The Eagles will be well-equipped to live up to Sanders’ all-star comment after drafting Jordan Davis and Nakobe Dean, signing Haason Reddick and James Bradeberry, and trading for AJ Brown.