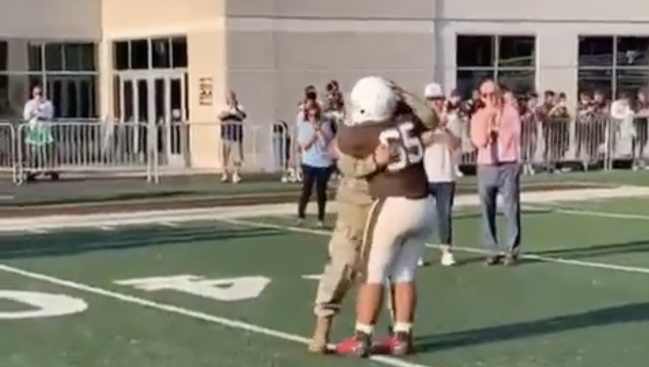 Richard Stringfellow was called out to the 50-yard-line ahead of Mount Carmel High School’s football game over the weekend. He wasn’t sure why he was being singled out and nobody clued him in.

What happened next was truly moving.

The PA announcer told Stringfellow that they had a surprise for him— his dad was home. His father had been serving overseas in the Republic of Korea and flew home in time to see his son take the field for the Caravan.

Stringfellow jumped for joy and ran to see his dad. On his way to the sideline, around the 20-second mark, he looked back almost as if to make sure it was okay if he went to go hug his dad.

He was so overcome with emotion that he really didn’t know how to act or what to do. The moment he meets his dad around the 40-yard mark is spectacular.

The entire sequence is overwhelming and, to make the day even better, Mount Carmel put a 55-20 beatdown on Niles Notre Dame.

Stringfellow, who is only a sophomore, leaped to the moon upon finding out that his dad was home. Look how high he gets— it’s a vertical leap that can only be reached with complete jubilation. 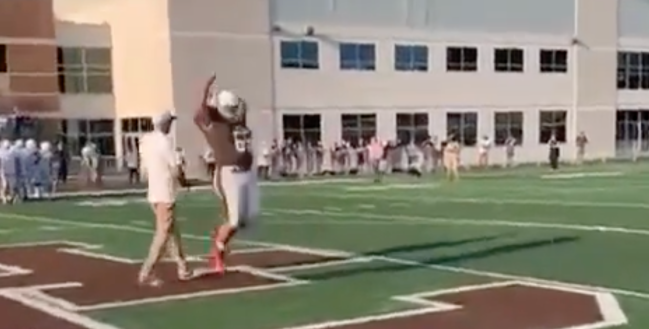 Everything about this video is touching and the waterworks are real. Military servicemen and women sacrifice their everything to protect our freedoms and that takes a toll not just on them, but on their families.

The moment that the families are reunited, no matter how big or small, are always special. Stringfellow’s surprise is no exception.