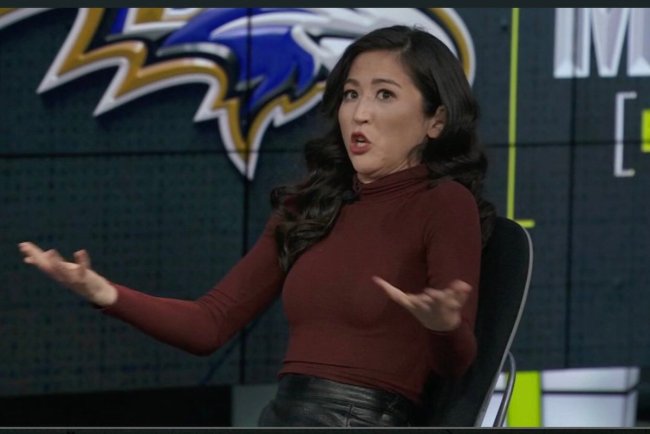 I told you the ESPN+ stream for Titans-Ravens Wild Card Weekend was going to be good.

ICYMI: Mina Kimes was featured in the ESPN+ watch-along stream for Titans-Ravens with Laura Rutledge, Dan Orlovsky, and Marcus Spears, along with Doug Kezirian, Joe Fortenbaugh, and Tyler Fulgham from Vegas. Honestly, I enjoyed it more than the booth broadcast – Lots of insight and chatter to keep the game lively, along with some real-time insight on the moving lines from the ESPN NFL Live and Daily Wager broadcast crew.

When Titans coach Mike Vrabel elected to punt on 4th-and-2 from the opponent 40 while trailing in the 4th quarter, Kimes reacted how all NFL fans reacted:

WHAT ARE YOU DOING?!

The result is an instant new Kimes meme.

Don’t sleep on these ESPN megacasts on ESPN+, folks.

They didn't question Tennessee's decision to punt on 4th and 2 at all on the main broadcast.
On the ESPN+ broadcast, everybody in the room yelled WHAT!??!?!, Laura Rutledge quickly explained the analytics on why they should have gone for it, and @minakimes made this expression pic.twitter.com/TOKu5q6THE

Here's the ESPN + room when the Titans chose not to punt and the analytics discussion, speechless Marcus Spears is something pic.twitter.com/12o47O1XbA

Excited that we have been blessed with a new meme template pic.twitter.com/yG1W0TuH2K

An attempt was made. pic.twitter.com/RYQ5cfzyW7

We all make mistakes and miss opportunities, Mike. But that one is going to be mocked for a very long time.

Here's Mike Vrabel's explanation for punting, it's what you expect pic.twitter.com/nxyW74EL9m