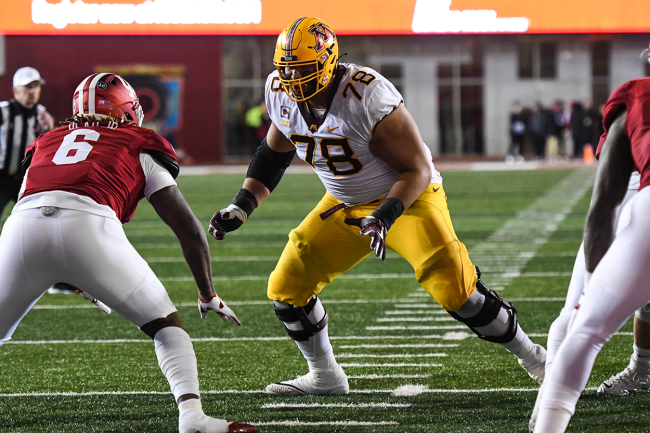 Minnesota football’s offensive line was insanely massive in 2021. The Golden Gophers’ starting five averaged a weight of 334 pounds and four of the five stood 6-foot-5 or taller.

They are all huge human beings.

Of the five Big Uglies, right tackle Daniel Faalele was the largest. The 22-year-old Australia-native grew up playing rugby and played only one year of high school football.

Despite his inexperience, Faalele was a four-star prospect after playing at IMG Academy. He committed to Minnesota over offers from Alabama, Florida State, Georgia and LSU.

This photo from @geauxsohard is a time capsule.

It's Sam Pittman (then a UGA assistant) taking video of Daniel Faalele at IMG Academy back in 2017 before he ever played in a football game. pic.twitter.com/yUxvXwrv9S

Now, four years later, he forwent his final season of collegiate eligibility and heard his name called in the 2022 NFL Draft. Faalele was drafted No. 110 overall in the fourth round by the Baltimore Ravens.

With the No. 110 overall pick in the 2022 @NFLDraft, the @Ravens select OT Daniel Faalele.

Earlier this spring, Faalele participated in the NFL Combine and shared what he loves about the sport.

Daniel Faalele shared some of the things he's learned to love about football. One of which is to be able to dominate another man legally. pic.twitter.com/CxdxdBLBOc

While in Indianapolis, he made history. At 6-foot-8, 384 pounds, Faalele became the heaviest player to participate in the NFL Combine since 2003, when NFL Network first was on-site to cover the event.

Heaviest player at Combine since 2003

In addition to his NFL Combine record, he is set to become one of the biggest players in history after being drafted on Saturday. If/when Faalele steps onto the field for rookie camp with the Ravens this summer, he will be the fifth-heaviest NFL player of all-time.

Here is the Top 10 heaviest players in NFL history:

Faalele is absolutely massive. He believes that his size and strength will be a big asset to whichever team decides to call his name.

Minnesota OT Daniel Faalele on using his size (6-9, 379!) to his advantage @ScoreboardNash pic.twitter.com/KMJTceV1Qp

You do not want to be a defensive end trying to get around him on the edge. It will not end well.

This is likely (*hopefully*) the closest you’ll get to what 6’8” and 387 pounds feels like coming off the ball. Any report on @GopherFootball OL Daniel Faalele must include the words “engulfs” and “mauler”.#TheDraftStartsInMOBILE™️ pic.twitter.com/JqBySJgec2

It’s hard to miss Faalele when he is on the field. He even scored the heaviest touchdown in college football history last season.

Considering that he has only played five years of football, the ceiling is extremely high for the former Minnesota trench warrior. Faalele is going to be a force to be reckoned with once he makes the adjustment to the NFL and Baltimore got incredible value and upside by getting him on Day 3.