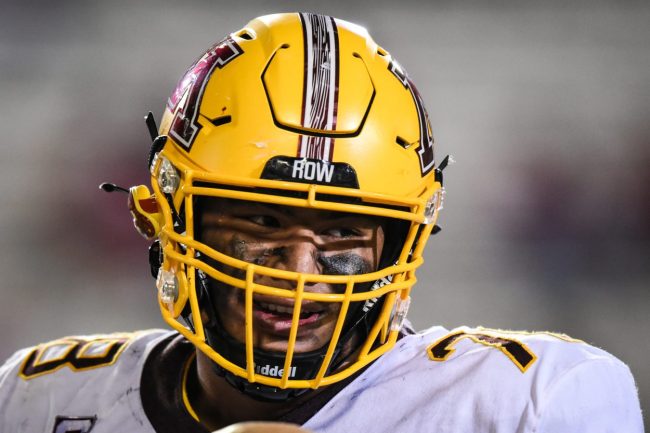 Minnesota’s offensive line is absolutely massive. The Gophers’ starting five averages a weight of 334 pounds and four out of five stand 6-foot-5 or taller.

Of the five Big Uglies, right tackle Daniel Faalele is the largest. He is 6-foot-9, 379 pounds and his story is awesome.

The 22-year-old senior is from Melbourne, Australia and played only one year of high school football. He played rugby and basketball growing up and was discovered by a coach at the University of Hawaii while he was scouting players down under.

Faalele participated in a local satellite camp that was run by Michigan head coach Jim Harbaugh and drew interest from multiple D-I programs. Among them Alabama, Florida State, Georgia, LSU and Minnesota.

After learning the sport in 2016, Faalele was recruited to play football at IMG Academy. He was a starter on an undefeated team in his first and only year, invited to the Under Armour All-America Game and listed as a four-star prospect.

Now, four years later, he is an integral part of a massive unit at Minnesota.

During Tuesday night’s Guaranteed Rate Bowl, Faalele got a taste of the skill position life. On 1st-and-goal from the two-yard-line, Faalele lined up in the huddle as he normally would.

However, after breaking the huddle, he lined up at fullback. West Virginia panicked and called a timeout.

But Gophers head coach P.J. Fleck didn’t care. He gave the ball right back to Faalele, who scored the thiccest thicc-six in college football history.

During Minnesota’s 2019 spring game, the Golden Gophers practiced this play and Faalele found the end zone.

And then, this past spring, Faalele dropped a dime. He threw a touchdown on a direct-snap, fake draw, jump pass. It was Tim Tebow-esque, but a lot bigger.

On Tuesday, Faalele scored his first regular season touchdown. What a way to go out!