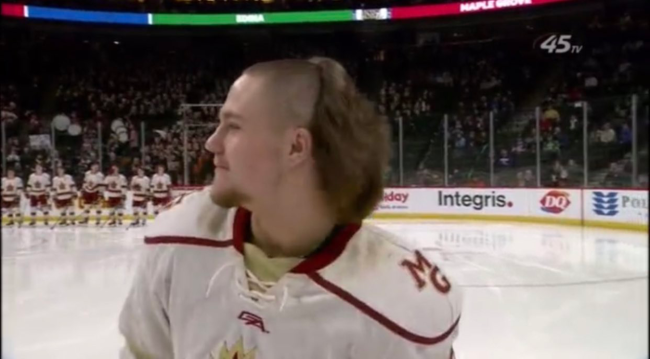 The Minnesota High School Hockey Tournament is one of the rowdiest events in sports. After a year without fans, a packed house of 20,000 are jammed into the Xcel Center in St. Paul.

Minnesota is the hockey mecca of the United States and “The Tournament” is a huge deal and everybody comes out to support their local high school— we’re talking brothers, sisters, parents, grandparents, friends, neighbors… all the way down to Barbara, the bagger at the grocery store. Men’s or women’s, it doesn’t matter.

If your team is playing, you’re there.

In addition to the energetic atmosphere and high-level hockey, The Tournament is a showcase for some of the best (loose definition) haircuts in the game. Players go all-out with mullets, dye jobs, racing stripes, afros, and free-hanging lettuce out of the back of their buckets.

Last year’s All-Hair Team was incredible, but the boys have really stepped it up in 2022. From bowl cut mullets, to half-shaved heads, to full-team dye jobs, the lettuce is luscious and the flow is rocking.

However, of the Maple Grove roster, Chayton Fischer is the leader in the clubhouse for best hair of the entire tournament and there is a very slim chance that anyone will dethrone him from the top spot. His shaved head mullet is INSANE.

Minneapolis’ entire team dyed their hair. Also, notice that they all have flow to begin with.

Henry Davis in particular lives for the camera.

This lad is smoooooth pic.twitter.com/eMLlmzrtfE

And then we’ve got Mahtomedi coming in with the full beards.

I don't know how Mahtomedi is going to do in the boys' Minnesota High School hockey tournament, but I do know that they lead the league in full beards. #TheTourney22 pic.twitter.com/1C28SqJ4cT

The beard is even more glorious in motion.

He later scored a goal and hit a fantastic celly.

From top to bottom, Mankato East-Loyola has it going on.

Take note of the bowl-cut mullet in particular.

Prague’s goalies are set to make their case for First-Team All-Hair.

the mullet game of new prague’s goalie tandem is stronger than their ability to keep hermantown out of their net. pic.twitter.com/ttxR2Jrc11

Edina, which usually brings some of the best hair to the Tourney, was solid once again.

Here's Edina's full hair run, I may add some full team intros from yesterday if anyone cares pic.twitter.com/idhdgoqZrJ

And Prior Lake brought the hair to match some of the best jerseys in all of hockey.

Giving you the full Prior Lake intros, not just for the hair, but the Packers throwback style jersey that has players screened on it pic.twitter.com/ouMjriWqbR

As for introductions, a few favorites stand out.

We’ll start with Warroad, who had a player with great hair trip, but recover gracefully.

And then there’s this guy, who went full psychopath and shouted out his mother. You love to see it.

We’ve got a full Tanev on the second day of the MN State Hockey Tourney!

The seductive mustache lick is a classic.

And everybody loves a good “The Rock” eyebrow.

The 2022 Tourney’s All-Hair Team will be released when all of the games have been played, but there are going to be a lot to choose from. It’s a stacked field this year.