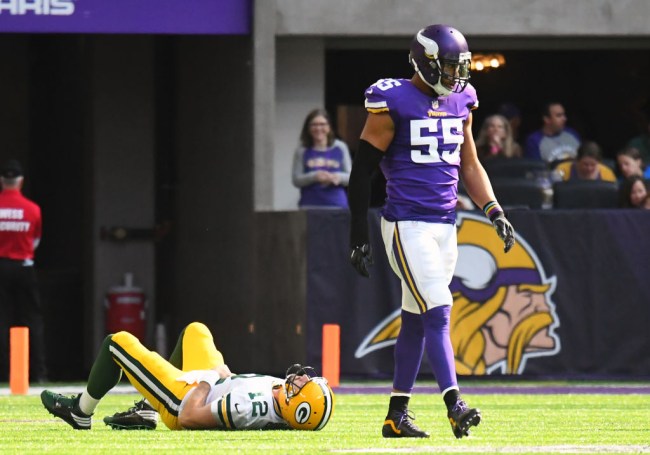 We’re only a few days away from the end of the decade and falsely filling out documents at the start of the new year by thinking it’s still 2019. With the new decade upon us, the ‘best of the decade’ lists have been making their rounds, but a certain ‘best of’ list out of Minnesota is really catching some attention.

The Minneapolis Star Tribune published an article summarizing the greatest sports moments of the past decade and decided to use the picture of Anthony Barr laying a hit on Aaron Rodgers that resulted in the quarterback breaking his collarbone in 2017.

Lmao imagine being as shallow as a Minnesota sports fans and listing “Injuring Aaron Rodgers” as one of their top 5 sports moments of the decade. pic.twitter.com/xJ262RoJg9

Aiden here got caught up in the moment, though, it’s a classic ‘I got excited and didn’t actually read the story, only looked at the picture’ situation we’re all victim to.

The piece isn’t a list or ranking of the top moments of the decade nor does the article mention the injury or even Aaaron Rodgers for that matter. However, the fact that the photo was used along with the caption ‘Barr injures Rodgers’ in a summary of the top Minnesota sports moments is a bad look.

It’s probably tough for Minnesota newspapers to publish a sports summary piece like this one and not show a Packers player being tackled, but of all the pictures to use, this probably isn’t the best one.

Rand Ball wrote the piece for the Tribune and addressed the situation confirming he didn’t choose the photo.

Ball doesn’t seem to be too big of a fan of Rodgers, though, seeing as how he took a shot at him following the Packers win over the Vikings on Monday night.

Hard to stay warm in the winter with such thin skin https://t.co/ZJ5RkTF3u0