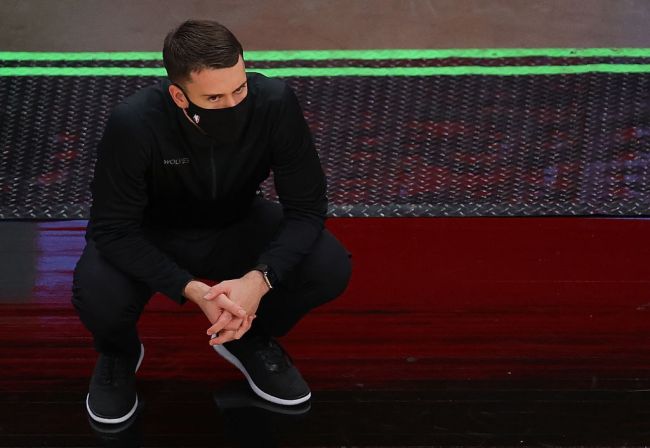 The Minnesota Timberwolves have fired head coach Ryan Saunders. The decision came after a 103-99 loss to the New York Knicks and Saunders’ predecessor Tom Thibodeau dropped the team to 7-24 on the season.

In what appears to be a classic case of talking to (and lining up) the new girl while still dating your soon-to-be ex, Minnesota has already found Saunders’ replacement. Shams Charania reported on Sunday night that the organization will hire Toronto Raptors assistant Chris Finch to take his place. The Timberwolves will not finish the season with an interim, they will not undergo a coaching search, they are set to bring Finch on as the full-time head coach immediately.

Chris Finch is becoming the new Timberwolves head coach on a full-time basis, not as an interim, sources said. The Timberwolves fired Ryan Saunders tonight after loss to the Knicks in New York. https://t.co/HFVdycuEUv

It is an unprecedented move within the NBA that has led to some speculation about tampering and whether the team had communications with Finch prior to firing Saunders. Another narrative includes Finch calling Minnesota with his job pitch immediately after the news of the opening broke and the organization being so impressed that it jumped at the chance to hire him. The most likely scenario (if there wasn’t previous contact) is that the Timberwolves’ front office had its replacement in mind, called Finch late on Sunday night, and Finch agreed on the spot.

Minnesota’s roster is centered around a duo of Karl-Anthony Towns and D’Angelo Russell. Russell is out for an extended period of time with a knee injury and Towns has had a deeply difficult year after losing his mother and multiple family members to COVID-19, catching the virus himself and getting hit by a drunk driver. Neither are at full-force this season, but are backed by a group of young, extremely raw potential. Malik Beasley is the second-highest scorer at 24 years old and could be traded for a two-way forward like Aaron Gordon, 2020’s No. 1 overall pick Anthony Edwards is beginning to show what he might be able to in the league, 2019’s No. 6 overall pick Jarrett Culver is slowly progressing, 21-year-old Jarred Vanderbilt is the team’s leading rebounder, and 2020 late first-round pick Jaden McDaniels could develop with time. It’s a group that has literally nowhere to go but up.

Finch, 51, replaces Saunders, 34, after spending time as an assistant with Houston, associate head coach in Denver and New Orleans, and most recently as an assistant in Toronto. He will try to turn down one of the league’s worst teams into one that can compete for a playoff spot as soon as next season.

When you think about it, the Knicks pushed out a head coach that wasn’t their own. What a time to be alive.