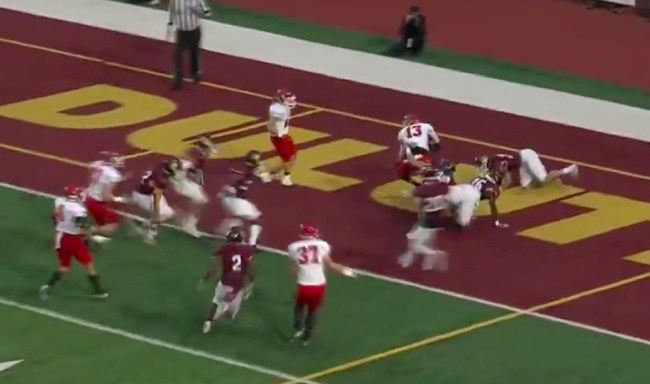 On Thursday night, the Bears and the Packers faced off in the first game of this year’s NFL season and picked up where Super Bowl LIII left off by treating us to another snoozefest in a contest that would ultimately see Green Bay prevail by a score of 10-3.

I’m going to go out on a limb here and assume most of the people reading this opted to watch the season opener instead of tuning into the Division II contest between Minot State and Minnesota-Duluth, who faced off in an interconference matchup on the latter’s home turf.

Minot State found itself facing a 15-point deficit toward the end of the first quarter and wide receiver Cory Carignan lined up to take the kickoff after a Minnesota-Duluth score before promptly botching the return and seeing the ball roll into the endzone.

Most people in a similar situation would fall on the pigskin and cut their losses by taking a safety, but as you’ll soon see, Carignan is not most people, as he managed to scoop it up and somehow avoid a barrage of defenders before taking it 104-yards to the house in a play that would make Devin Hester proud.

THIS IS THE COLLEGE FOOTBALL HIGHLIGHT OF THE YEAR pic.twitter.com/VKtk76beko

Sure, the score was only made possible because of Carignan’s initial brainfart but you’ve got to give the kid credit for not giving up on the play.

I know that the college football season has only just begun but I have a hard time believing we’re going to see another play this year that manages to top this one.