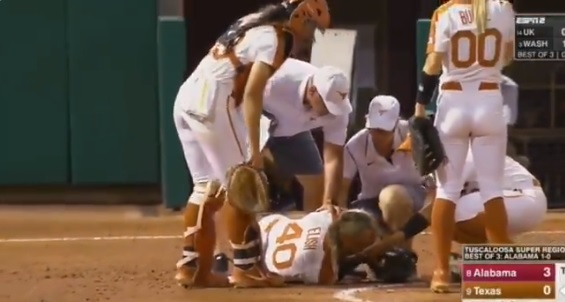 Last night, Texas softball pitcher Miranda Elish was taken to the hospital after she got accidentally pegged in the face with the ball during a NCAA Division I Super Regional game against Alabama.

During the second inning, Texas catcher Mary Iakopo threw to second base to try to get a forceout after Alabama’s Elissa Brown bunted the ball. Unfortunately, Elish didn’t see the throw and got hit in the face with the ball.

Scary situation in Texas-Alabama softball game. Catcher's throw to second base hit Texas pitcher Miranda Elish in the face. She was down for several minutes and taken to a hospital. Reports say she is doing well and hospital trip was just a precaution. pic.twitter.com/ahYFLk0ULI

OMG….UT pitcher Miranda Elish just took one to the face, from her catcher @FlaggedSports pic.twitter.com/g6zwnyoSEu

Despite having a bit of a swollen face it appears that Elish is ok.

INJURY UPDATE: More good news all as we've been told "@elish_miranda is doing well and was taken to the ER as a precaution.,." 🙏

Thank you for all the best wishes and love for Miranda #truewarrior pic.twitter.com/OuXKqZizCx