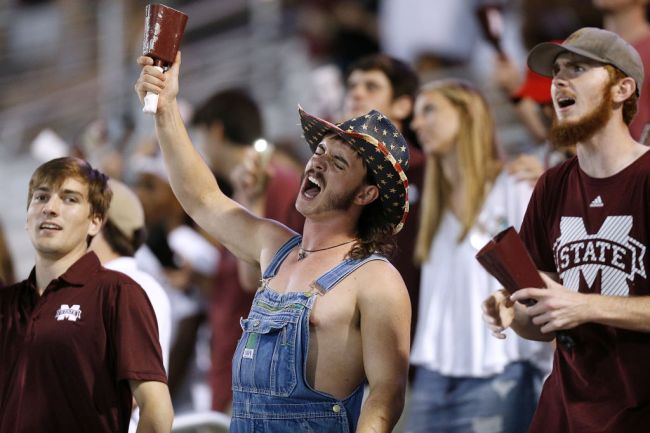 Mississippi State and Vanderbilt begin their best-of-three series for the national championship on Monday night, and tickets to get in the door are not cheap. On the secondary market, tickets are going for well over $250 apiece, which is well out of the price range for some college students.

The high prices aren’t hurting the spirits of some die-hard Mississippi State students, however. A few students that made the trek to Omaha decided to camp out in front of the box and test their luck at landing regular-priced tickets as soon as the window opens.

Students and fans camping out at stadiums is nothing new, it happens quite often actually, but that isn’t the best part of the story here. After a pretty standard local news channel interview, the anchor asks the State fans if they have anything else they want to add, which is when the fun really began.

Colton, with a completely straight face, jokes that he had to sell his prosthetic leg back in 2018 so his girlfriend’s husband could come to watch the Bulldogs during the 2018 College World Series.

"The box office opens at 10 o'clock (AM), I don't know how many tickets they have but we will get the first ones." These are some die hard @HailStateBB fans! Brady and Colton are waiting here in Omaha all night for tickets. @WJTV @brady_k27 @colton8swatson pic.twitter.com/ilEvLpNcmC

The prosthetic leg story is a tribute to one of the all-time great fan videos. State fan Terry Powell went viral in 2018 for telling a similar story about selling prosthetics.

“My wife’s boyfriend sold his prosthetic leg on Craigslist to afford me the opportunity to be here” is one of the greatest sentences ever spoken. The delivery from Mr. Powell is incredible: