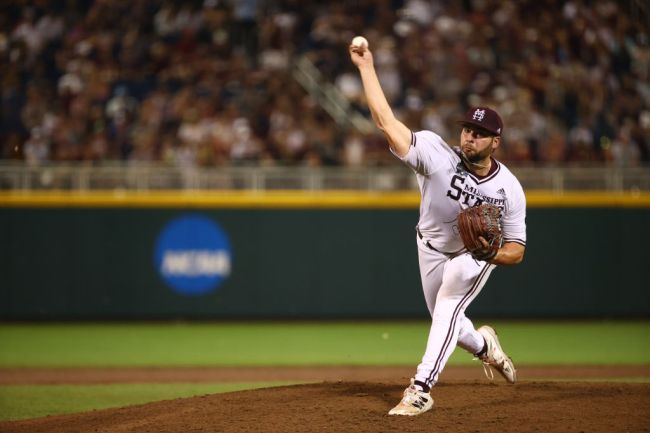 Preston Johnson pitched a stellar five innings for Mississippi State Tuesday. In his outing, he posted a season-best seven strikeouts and earned the win for the Bulldogs.

Despite his impressive numbers, Johnson’s outing was not perfect. But, he had the perfect reaction after giving up a home run to Vanderbilt’s Maxwell Romero Jr. in the top of the 9th inning.

Right away, Johnson knew the ball was going out of the park. So, he bid that ball a bittersweet farewell. And it was gold.

It’s not often you see a guy wave goodbye to a home run ball he just gave up. All credit to @HailStateBB pitcher Preston Johnson. #CWS pic.twitter.com/wx9GWKlRha

“I threw that pitch and it was kind of — I had thrown two sliders first pitch to the other guys,” Johnson said after the victory. “And he was sitting on it. He got it, he got me. A good team like [Vanderbilt], you can’t make mistakes. And I made a mistake with one pitch, and he hit it a long way. Hats off to him. Good swing.”

Johnson clearly respects his opponent. With his team up 13-1, why not have a little fun on the mound? In a clear route to victory, Johnson added some flair to his game and entertainment for the fans. Hail state!
The home run was the only run Johnson allowed and one of two hits. His impressive outing paved the way for Mississippi State’s 13-2 victory, which forces a game three in the College World Series Championship.

Mississippi State will play Vanderbilt again tonight at 7 p.m. EST in the final game of the college baseball season.