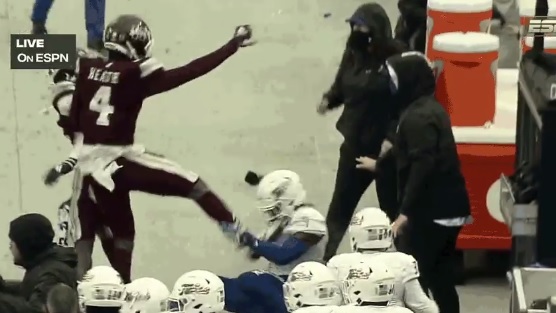 An all-out brawl broke out Thursday afternoon during the Armed Forces Bowl between Mississippi State and Tulsa that got pretty ugly.

After the brawl, several Mississippi State players went on Instagram live to rewatch the brawl on their phones and laugh about it.

Miss State WR Malik Heath even went as far as to brag about kicking a downed Tulsa player in the head before running way during the brawl which is certainly not a good look for him and the program.

This man is on here laughing about kicking someone in the face and then running away scared 🥴 bad look #ArmedForcesBowl pic.twitter.com/449vYLXzYa

Here’s a closer look at the kick to head Heath is bragging about.

Heath attempted to defend himself on Twitter but deleted his tweets after people kept calling him a coward.

He keeps trying to defend himself and getting roasted so bad he deletes the tweets in a couple minutes 😂 pic.twitter.com/AQF1YxRVB6