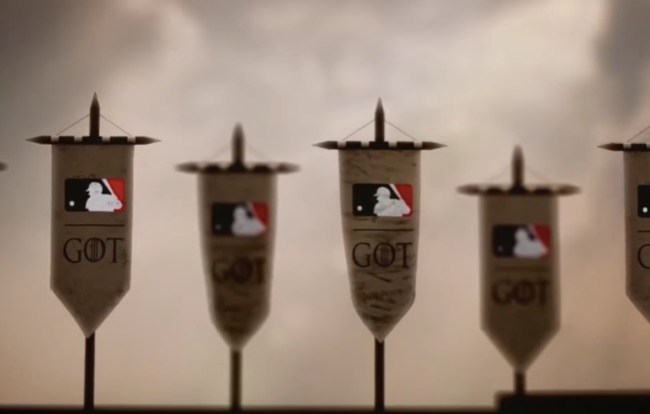 Fans of HBO’s Game of Thrones will have to wait until 2019 for new episodes but MLB fans have less than 24 hours until Opening Day of the 2018 baseball season and that means some awesome collaborations are on the way. Both Minor and Major League teams have rolled out Game of Thrones promos in the past and there will be plenty more of that on the horizon this season all across the country.

To hype of 2018 MLB Opening Day, Major League Baseball put together this Game of Thrones-themed promo in which a stadium is built in the same way that each GoT episode begins, piece by piece, in a building-block style.

HBO PR published an article on Medium outlining what fans might expect from this Summer’s Westeros-themed promos that they’ll be rolling out ‘Major League Baseball and HBO announced a renewal of their partnership to bring specially customized “Game of Thrones” events, giveaways, ticket specials and experiences to participating MLB ballparks this Summer.’

MLB and HBO partnered to roll out these promos at 20 ballparks across the country last Summer and while they haven’t released details of where they’ll be holding these events this Summer, they said they’ll be releasing details soon. So expect that more Game of Thrones baseball in your future.