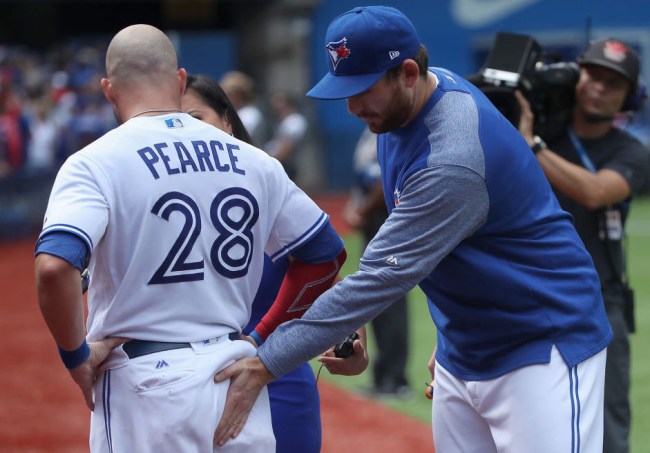 Hugging and spitting. Those are the two things everyone is missing the most these days, right?

I assume most people are pining more for that first one, as I imagine not being able to spit in public anymore is pretty low on the list of things the world as a whole is worried about compared to, I don’t know, finding a new job. However, it turns out it’s a pretty notable issue if you’re a Major League Baseball player.

When teams were finally able to assemble to train for the upcoming season, they were greeted by some pretty jarring changes, including talking to reporters over Zoom (as if face-to-face interaction with the media wasn’t bad enough already) and being subjected to regular temperature checks (and presumably being dragged into a secure tent by people in hazmat suits if they fail).

There’s also the social distancing rules they have to abide by and some guys have had a harder time adjusting than you think.

I’ve always been more of a hug guy than a handshake guy; when I see someone I know, my instinct is to stretch out my arms and let instinct do its thing. I’ve had a hard time acclimating to our new environment so I can’t imagine what MLB players are dealing with considering their historical affinity for not just hugging but high-fiving, fist-bumping, the ruffling of each other’s hair, and all other similar forms of brotherly love.

It sounds absurd, but these various gestures actually have more of an impact on sports than you’d think. A study from 2010 basically proved the Dallas Mavericks won the NBA Finals over the Miami Heat because they touched each other more than any other team. If you want to build real team chemistry and keep each other motivated, you gotta be high-fiving and slapping butts.

Cubs slugger Kyle Schwarber elaborated on the topic and the change in mentality that’s now required while chatting with reporters earlier this week, saying, “In baseball, you’re used to patting someone on the back or butt or whatever it is. Now you’re trying to respect everyone’s [space].”

The sudden lack of physical contact may be one the most difficult aspects but we also can’t forget about spitting, an issue that Dodgers third baseman Justin Turner shined some light

“It’s just almost second nature. Spitting for a pro baseball player is like blinking. It’s going to be a tough habit to break… It’s not even just spitting on the ground. A lot of us have routines and habits. You spit a little bit on your glove before each pitch.”

Everything becoming so structured and isolated has clearly had an impact on how players traditionally prepare, and with the season currently slated to start on July 18, it’ll be interesting to see how much self-restraint they show during the kind of moments where they traditionally storm their teammates in celebration.

I feel that will be missed a bit more than the act of spitting but I assume Justin Turner might disagree.