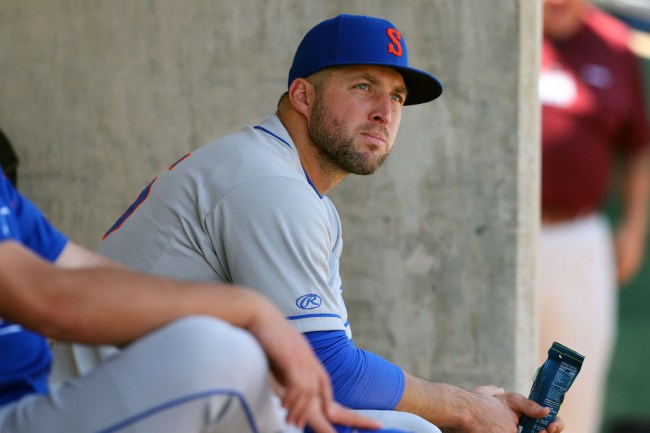 Tim Tebow has been embarrassingly bad in his Triple-A stint this season. One MLB scout made a brutally honest observation about Tim Tebow’s baseball career.

In 51 games for the Syracuse Mets, Tebow has a putrid .152 batting average, .235 on-base percentage, 70 strikeouts, and only one home run with 14 RBIs in 165 at-bats. Last month, Tebow was struck out by a position player making his pitching debut. Buffalo Bisons 1B/OF Jordan Patterson K’d Tebow with an 88-mph fastball.

The former Heisman Trophy winner turned professional baseball player appears to have hit a wall since being promoted to the New York Mets’ AAA team. One MLB scout says that you shouldn’t ever expect to see Tebow in the big leagues any time soon or ever.

“I just think he’s reached his top, his zenith, as far as Triple-A,” the anonymous MLB scout told the New York Post. “I don’t think he’s a major league player, but I think he works extremely hard and he will run into some fastballs, and when I saw him he was really getting tied up inside and just striking out a lot and not making contact.”

“I don’t think this is a show, because Tim Tebow is an athlete and athletes are athletes. He’s strong, he’s got strength and I am not going to take away the fact he is coming off a hamate,” the scout said of the The 31-year-old outfielder. “If he turns out to be an organizational Double-A or Triple-A player, he’s not the only one who would be that.”

The scout said that Tebow’s broken hand from last year can still have lingering effects on his swing and power. “That to me is something that needs to be thought about,” the scout said. “I have seen players that have played a lot longer than he has and come down with that injury and take a while to regain the strength in that. He’s being pounded in with fastballs and I think that is probably one of the reasons why they are doing that and obviously he hasn’t responded.”

Contradicting the scouting report, the Mets management thought Tebow was an MLB-caliber player last year. “That’s my guess,” former Mets GM Sandy Alderson said about Tebow’s chances to make it to the big leagues. “That’s my hope. And to some extent now after a year and a half, a modest expectation.”

Mets assistant general manager Allard Baird was still upbeat about Tebow despite his AAA stats. “I think the effort, the energy, all those things, I don’t think anybody can question,” Baird said. “He has struggled. I think he would be the first one to tell you that. We are trying to continue to work on approach, get him in a good position to hit, that’s an on-going thing.”

Despite his laughable stats, Tebow is not only on the MiLB All-Star ballot, but he is one of the top seven outfielders in votes. Talk about failing upwards.