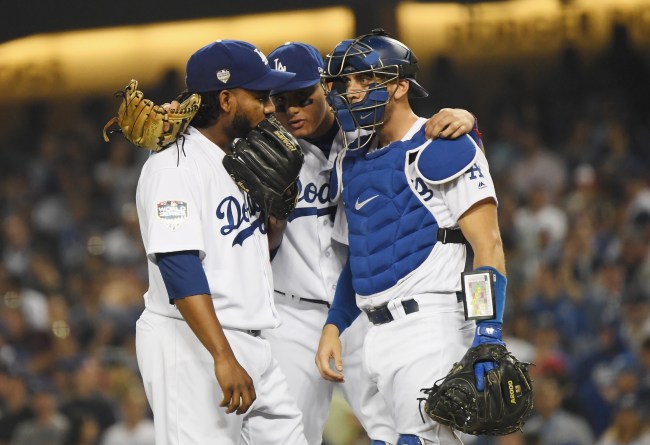 MLB sign-stealing has been a big problem for, well, since the beginning of time, really. The old saying goes something like this, “If you’re not stealing signs, you’re not trying.” While that may seem like admission of guilt, it’s no secret that every single team has done it in pretty much every single game played. It’s just one of those unwritten rules that nobody wants to talk about.

Thing is, MLB wants to talk about it. In fact, they want to try and eliminate players from even thinking about doing it. According to Jesse Dougherty of the Washington Post, he was watching spring training at the Washington Nationals’ camp and noticed a new device that allows pitchers and catchers to communicate through a watch to decide on pitches and signals. No joke.

MLB is at Nationals’ camp today workshopping a new communication device for pitchers and catchers. It would allow catchers to type a pitch call (with location) into a watch that is connected to a watch the pitcher is wearing on the mound. An effort to eliminate sign-stealing.

All I can really ask is WTF?

Look, I get that MLB wants to try and get rid of everything about sign-stealing because it has the reputation of being bad for the game. But if every single team is doing it, isn’t it just a part of the game? To me, this would be like the NBA saying three-point shooting is boring for fans and has gotten out of control, so they’re going to eliminate it altogether and incorporate a four-point shot for anything beyond half-court. It’s a cool idea, but just won’t be effective.

I’m not the only one who thinks this whole MLB sign-stealing watch idea isn’t necessarily a good one. In response to Dougherty’s report, Houston Astros pitcher Lance McCullers Jr. thinks that players want crisper played games, and that the new tech might be too advanced. Here’s what the pitcher tweeted out after first hearing about the watch device.

I honestly know nothing about it. First time I saw it/heard of it was this tweet. I feel like the tech is definitely too far ahead for regular signs anymore. We, as the players, want the game crisp for the fans so less mound visits etc. and need a way to combat it.

Outside of how players feel about the idea, another thing to take into account is MLB’s ongoing battle with pace of play. For years, baseball has been doing anything they can to shorten games — even discussing implementing a “pitch clock” that counts down between pitches, as well as the league trying to limit mound visits. Doesn’t this sign-stealing watch idea combat that? Wouldn’t it just add more length to games?

It’s good that MLB is testing things like this during spring training to try and solve the whole sign-stealing epidemic. But this watch idea just seems like the wrong way to try and get rid of teams doing it, and would probably create more problems than the game needs. Just keep things as is, because it’s been happening for centuries.