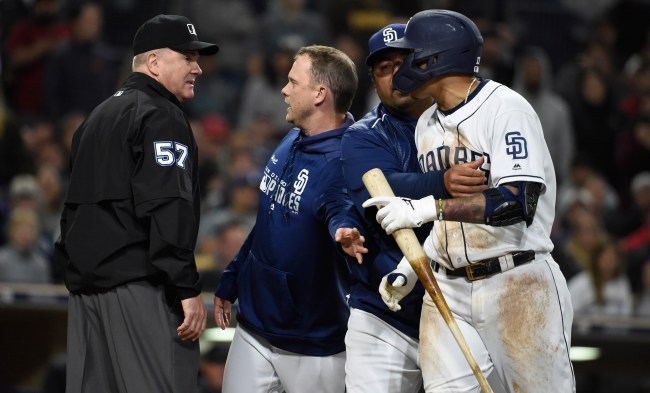 This came to a head Saturday night when Machado got into an argument with home plate umpire Bill Welke over balls and strikes.

Major League Baseball claims that Machado was “aggressively arguing and making contact” with Welke in the course of their “discussion” and suspended him for one game.

Machado says he plans to appeal his one-game suspension and fine because he doesn’t think he made any contact with Welke.

On Tuesday, the MLB Umpires Association went completely off the rails with regard to Machado’s suspension, posting a lengthy, bizarre rant on social media, ripping Machado and Major League Baseball.

On Twitter, the Umpires Association wrote, “Manny Machado received a one game suspension for contact with an umpire over balls and strikes and VIOLENTLY throwing his bat against the backstop with absolutely no regard to anyone’s safety. Violence in the workplace is not tolerated, and offenders are dealt with severely and even made examples of for the good of it’s (sic) employees, as well as the company itself. Is this truly what MLB wants to teach our youth?”

On Facebook, the Umpire’s Association went even further, going into even more detail on how they feel about Machado’s suspension.

The ⁦@MLBUA⁩ gets into more detail on its Facebook page, blasting @mlb for a 1 game suspension of Manny Machado: pic.twitter.com/6i7Mb1P2U9

Granted, a quick search of Manny Machado photos reveals a lot of this…

So he is definitely a thorn in many of the MLB umpires’ sides, but today’s diatribe on social media seems to be a bit much – at least according to many fans on the internet.

All you're doing is a making better and better case for being replaced by robots.

No nonsense? This tweet is utter nonsense and is offensive

This is an absolutely dishonest representation of what occurred AFTER Manny Machado was inappropriately ejected from the game.

Please consider hiring an objectivity consultant to help your organization and staff behave in an honest, ethical, and impartial manner moving forward.

Me buying a Manny jersey. pic.twitter.com/MMKHnj5IED