MMA Fighter Brutally Knocks Out Opponent With Spinning Elbow, In The Mix For ‘Knockout Of The Year’ 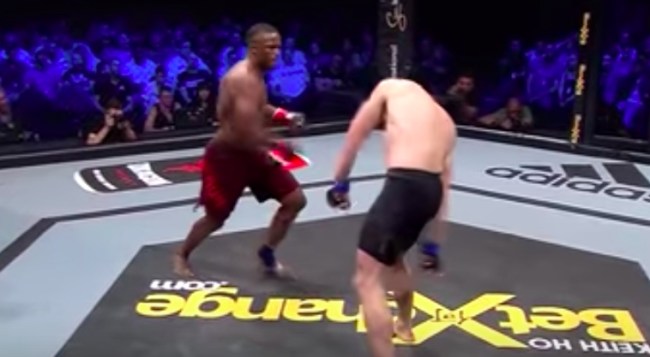 If you’re a sucker for a good, violent knockout, then you’ve come to the right place. Ten months into 2018, we must consider a late-entry Knockout of the Year submission. While the Daniel Cormier/Derrick Lewis UFC 230 fight attracted the most eyeballs and the Sheymon Moraes/Julio Arce fight resulted in a literal bloodbath, the most captivating professional fighting moment of Saturday night belonged to an Extreme Fighting Championship bout between Mzwandile Hlongwa and Torbjorn Madsen in Cape Town, South Africa.

A mere 70 seconds into the first round of the fight, , Mzwandile “Shakebone” Hlongwa perfected a spinning elbow on Madsen, who was previously undefeated (5-0), that left him temporarily lifeless.

Shakebone, who was first featured on the South African reality show The Fighter, has been on a tear as of late. Not winning the reality show competition has evidently given the South African-born fighter a massive chip on his shoulder. He’s knocked out his last three opponents and currently holds a 3-1-1 record.

According to News AU, Madsen was tended to by medical staff and taken out of the arena on a stretcher. He reportedly came to as he was ushered to the hospital, eventually telling TV 2:

“I’m in the ambulance now.”

“I’m going to a check in the hospital. Everything is fine. This can happen, it’s fun. Well done by him.”

This snapchat is going to find a place front and center on Shakebone’s mantle at home.

Take a look at a bunch of different angles of the blow below.