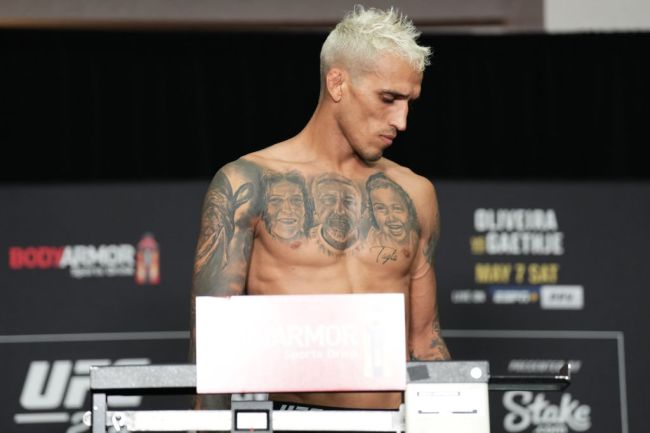 Coming into this fight week, Charles Oliveira had a chance to pull within one title defense of Khabib Nurmagomedov for the most ever by a UFC Lightweight Champion. Instead, he made a different kind of history.

The weigh-ins for UFC 274 were held in Phoenix today and they featured plenty of drama. Charles Oliveira was one of the last fighters to weigh in today ahead of his 2nd title defense. When he finally weighed in, he came in at 155.5 pounds, a half pound over championship weight. The news seemed to shock him.

Oliveira was given an hour to cut that last pound, but when he returned to the scale, he got the same result. Oliveira had officially become the first UFC champion to ever miss weight before a title defense and was stripped of his UFC Lightweight Title.

Lightweight title will be vacated.

Do Bronx makes history. First UFC champ to lose a belt on the scale.

While Oliveira will now not have the chance to fight for the belt tomorrow night, his opponent, Justin Gaethje, will still get that opportunity.

The MMA world was quick to chime in on this shocking weight miss with two of Oliveira’s past opponents even chiming in.

Wonder if he still wants to fight at 145. I have nothing against the champ. But this is a disgrace. And I honestly feel most for Justin. What an absolute let down for everyone in the division. #sadday

Making weight is always hard. But thinking you’re on weight, then missing weight, just to have to go lose more weight after you’ve lost your initial sweat is a living nightmare both physically and mentally. #ufc274

Baffling part for me is that Oliveira didn't shave his head.

Why not pull out all of the stops?

Most importantly, Justin Gaehtje had an absolutely brutal reaction to his opponent’s weight cut issues.