Molly McCann Became The First English Woman To Win A UFC Fight And, Oh, My God, Look At Her Eye! 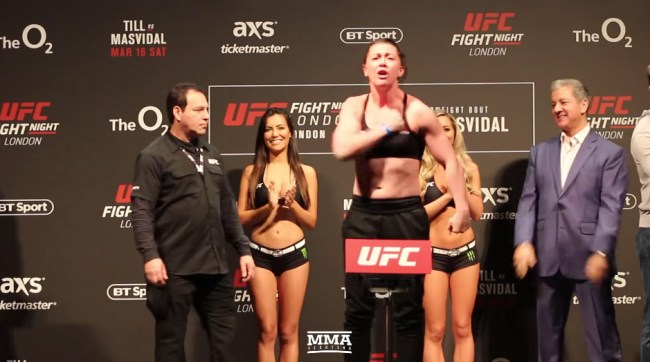 Over the weekend, Molly McCann became the first English woman to win a fight in the UFC, but you would never know it by the look of her brutally beaten left eye after the victory.

McCann and Priscila Cachoeira went the distance during the preliminary card of the UFC event at The O2 in London on Saturday night with both women taking a tremendous beating.

McCann, who ended up taking the decision 29-28 on all three judges’ cards to move to 8-2 in MMA and 1-1 in the UFC, was checked by the ring physician in the third and final round as her left eye was visibly damaged, but the doctor allowed her to continue.

After her first UFC win, McCann, who goes by the nickname “Meatball,” told the media, “Honestly, I’ve been through hell and back since the last fight. I wanted to give a performance you’d be proud of.”

From the look of the post-fight photos, it appears like she went through hell during her fight against Cachoeira. Or, at least her face did.

Molly McCann Shows The Eye of the Tiger https://t.co/n80Vcee4zr pic.twitter.com/y4BnnjumqY

. @MeatballMolly via her insta story. In great spirits on route for a check up. That eye!!! @btsportufc pic.twitter.com/JXpaDMQsZB

Just ran into @MeatballMolly back at the #UFCLondon host hotel. Told us she broke her orbital in the third round and has surgery set up first thing in the morning. Still all smiles after her first UFC win. pic.twitter.com/j3SQOVQ5d8

Molly McCann made history last night becoming the first English woman to win in the UFC. Here is how @MeatballMolly’s eye looked last night and how it looks this morning. She sent me these photos. She suffered a broken orbital bone in the victory. pic.twitter.com/HinCKjdJPz