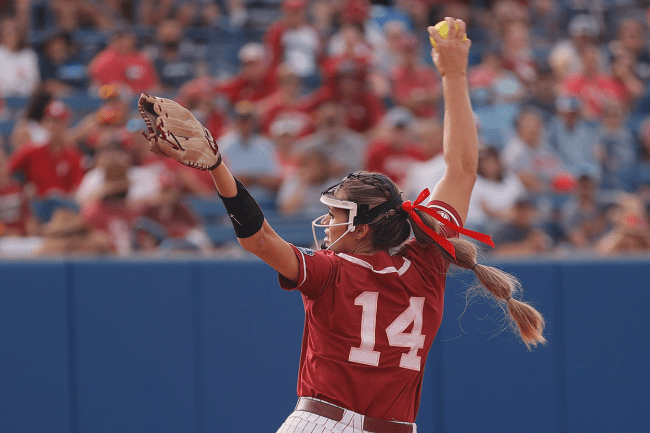 Alabama softball pitcher Montana Fouts is one of the top players in the nation at her position. The 6-foot-1 righty from Kentucky is the ace for the Crimson Tide and she is the whole package.

Not only is she a tremendous softball player, but she is personable, carries herself with the utmost dignity, is incredibly personable both on and off camera, and is always taking ever opportunity to give back.

Oh, and Montana Fouts is pretty dominate in the circle for Alabama softball.

During last year’s postseason, Fouts recorded 16 strikeouts in a regional win over Clemson.

Although Fouts has been up-and-down at some points throughout 2022, she remains dominant. The senior ace has thrown 109.1 innings and allowed only 75 hits and 36 runs. Meanwhile, she has struck out 180 batters which is just under half of the total batters she has faced.

As a result of her dominance in the circle, as well as her personable persona, Fouts has quickly become a household name in the softball world. Many young girls who are growing up playing the sport want to be like No. 14 for Alabama.

Earlier this year, a heartwarming video was captured that shows just how much she means to young girls, particularly in Tuscaloosa. The video shows Fouts warming up in the bullpen while a young Crimson Tide fan stands just beyond the fence and copies Fouts’ wind-up and pitching motion from start to finish.

College softball continues to grow in popularity and the product on the field makes it easy to see why. The young women on the field are tremendous role models and it’s always great to see videos like this, where a younger child is able to share such a special moment with his or her hero.