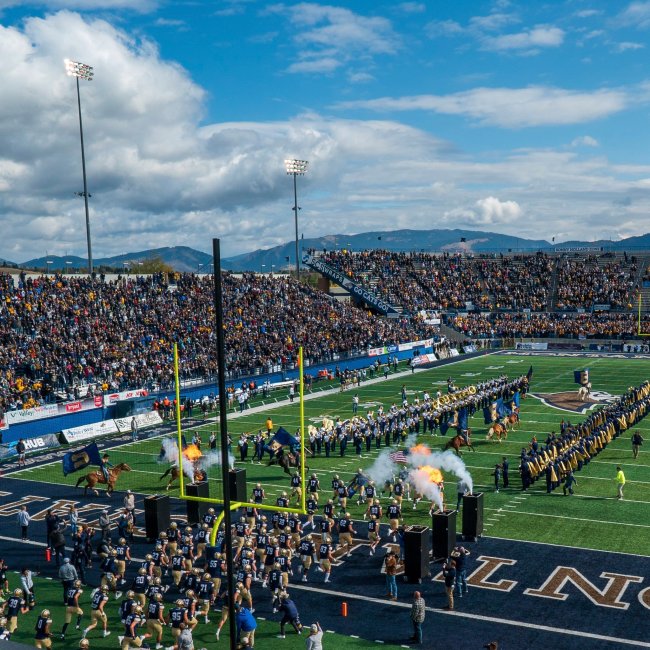 If you have never been to a football game at Montana State University, you need to put it on your bucket list. Not only are the Bobcats a competitive program on the FCS level, but the campus is beautiful, the people are among the best in the country, and the game day atmosphere is unlike any other in the country.

Bobcat stadium sits right in the heart of Big Sky country and features an unbelievable backdrop of the Montana mountains. And, if you’re lucky, you might get to see a streaker get absolutely wrecked.

That was the case on Saturday, as MSU hosted Idaho State. At some point during the 27-9 route of the visiting Bengals, a shirtless student decided to hop the fence and take off running across the field.

After going 70+ yards down the sideline without interruption or any sort of chase from security, he gets met with an unexpected surprise. A Bobcat player — either freshman wide receiver Charles Brown or junior safety Jeffery Manning Jr. — decided to take matters into his own hands, or foot.

As the streaker reaches the opposite 30-yard-line, the player steps off of the sideline and sweeps his leg. The streaker completely flops to the turf as the crowd lets out a collective “ooohhhhhhh.”

Take a look from the perspective of the student section:

Here is a better angle of the textbook leg sweep. It sounds like the game continued despite the streaker and Montana State even hit an extra point as he was running on the field.

Goodness gracious! It is unclear as to whether the streaker saw any punishment for his actions. However, perhaps the utter embarrassment of getting WRECKED is enough.