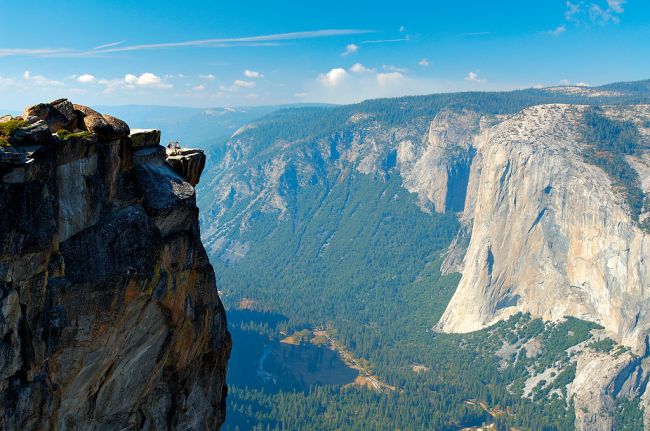 Moises and Daniel Monterrubio are braver men than most. The two brothers from San Francisco claim to have set the record for longest highline ever walked in both Yosemite National Park and the state of California.

Earlier this month, the Monterrubios and a group of 18 friends spent six days stringing a single, 2,800-foot-long line across a series of gulleys. The line was anchored at Taft point, rising 3,500 feet in the air.

If the line snapped, it would send the brothers plunging 1,600 feet to their death.

Highlining is just slacklining on steroids. A narrow strip of strong nylon runs between two anchor points. The line itself is typically one or two inches wide and a few millimeters thick. There isn’t a whole lot to it.

Completing a line, in this instance nearly a third of a mile up, means successfully walking from end of the line to the other. Yes, there is a harness. But it’s not much.

Highline walkers tie a harness to their waist that attaches to a 3-inch steel ring around the line. Walkers remain attached if they fall, but there is a technique involved, where it’s important to catch the line as they fall.

This isn’t something that can just be done by anyone. The brothers and their friends had to get permission from the park to do so. They did.

The longest line walked in Yosemite prior to the Monterrubio camp had been a 954-footer, from Taft Point to an anchor point on the east side. This new line was nearly three times that length and ran west.

Everything came together on June 10th and the brothers began their walks. Here is an inside look at the process from start to finish:

Daniel, 23, walked the line first. He fell three or four times in the wind but made it across.

Moises, 26, went second. He also fell twice, but he caught himself on the line before ending up dangling below.

After the brothers had gone, the two and their friends took turns on the line for four days. They all fell as well, but a highliner sets out onto a line with the purpose of crossing without slipping off.