JJ Redick And Grayson Allen Reminisce On Their Time At Duke, Debate About Who Was The Most Hated 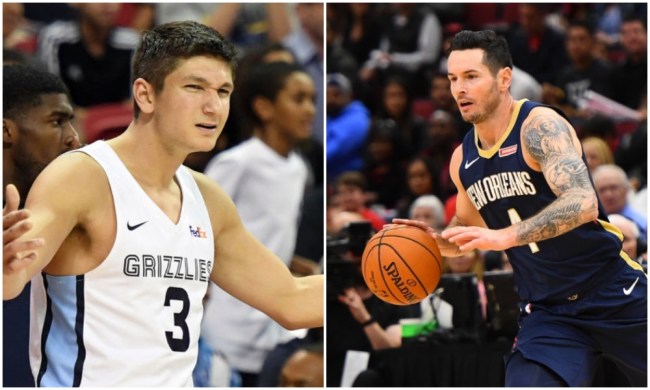 Christian Laettner is the ultimate Duke villain and is probably the greatest villain in the history of college basketball. Laettner is in a league of his own, but when it comes to the No. 2 spot for the most hated player in Duke history, Grayson Allen and JJ Reddick are the two names that get tossed around the most.

Allen was a guest on Redick’s podcast ‘The Old Man And The Three’ on Monday and the two looked back on their careers at Duke and got into the debate of who was hated more during their careers in Durham, NC.

Allen, who played at Duke from 2014-2018, was known not only for being a strong two-way player but for tripping other players. To the disadvantage of Allen, social media was a thing during his college career, which is exactly why he thinks he was the most hated Duke player between Redick and himself.

He did admit to seeing some of the videos of Redick at Duke back in the day and said he may have him in the crow chants and overall atmosphere aspect.

“I’ve seen some of the videos of you,” Allen said. “Some of the chants that the crowds had might’ve even — they were on par [with what I faced] or maybe even worse. If you just go game atmosphere, you might have me on that.”

This opened up Redick’s memory bank of all of the foul things he had written and said about him by fans during his college days.

“I come out for warmups — there’s a sign that says ‘JJ drinks his own pee,'” Redick recalled. “Hilarious. There was also a sign that makes a reference to a lewd sex act with my 12-year-old sister. Then, there’s a group of students sitting in the front row who have these custom T-shirts made, and it’s a picture of me, and they ‘When I grow up, I want to name my kid JJ Redick.’ And then, on the back, it says ‘And beat him every day.'”

You can check out the two former Duke stars talk about their college hoops days below: