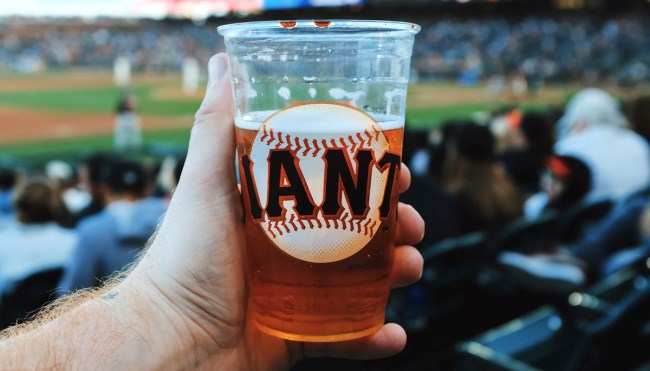 Every single person who buys a ticket to a Major League Baseball game implicitly agrees to the terms and conditions that state each spectator that passes through the gate “assumes all risks and dangers”  that come with watching a game in person—including the possibility of “being injured by thrown bats; bat fragments, [and] thrown or batted balls.”

While there’s no legal language concerning the issue I’m about to address, I’d argue that anyone who’s willingly attending an MLB contest (or any major sporting event) in person in this day and age should also lose the privilege to complain about how much you typically have to shell out for a beer.

Am I happy that we live in a world where I no longer think twice about dropping $13 on a tallboy of Miller Lite from the vendors with a monopoly on drink sales? No, but when my options are to either suck it up or go an entire game without a cold adult beverage at my side, I’m going to opt for the first one every single time.

With that said, some teams charge some particular egregious prices compared to others—including those at the top of the list when it comes to the most expensive beer in the MLB.

The worst offenders were recently brought to my attention courtesy of VinePair, which took a look at the average price-per-ounce of a brew based on the numbers that were compiled by Team Market Research for the most recent installment of its MLB Fan Cost Index.

According to the data, the worst offenders are as follows:

There are some comparative deals to be had—none of which are more notable than the $3 beers offered at Coors Field, which are more than three times cheaper than those served up at Fenway Park.

These teams feature the most reasonable prices in the league:

When you consider the average PPO at an MLB stadium is 50 cents, it’s safe to say the Rockies are doing something right (which might help explain why a team that’s currently close to 20 games out of first in the NL West is still top ten in attendance on the season).