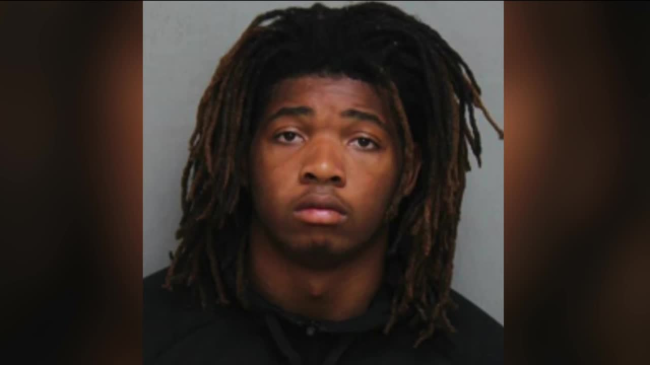 Etute, a human development major at Virginia Tech, is currently being held at the Montgomery County Jail without bond, according to WSLS News.

“Witnesses have been identified and interviewed, and are cooperating with investigators. There is no reason to believe there is any ongoing threat to the public,” said the Blacksburg Police Department.

The Roanoke Times has also reported that Etute was cited for multiple traffic violations in Radford, Virginia on Monday while driving a 2019 BMW SUV. He was charged with reckless driving and failure to obey a stop sign, according to court records.

Virginia Tech issued a statement about the arrest, saying Etute “has been suspended from the team, effective immediately.”

So far no motive for the murder has been revealed, but numerous people claiming to be locals have come forth on Reddit with a flurry of wild claims, allegations, and accusations.

Obviously, nothing written on this Reddit thread should be considered to be fact, but as we have seen time and time again, internet detectives, especially those with local ties to the story in question, have been known to crack cases and reveal truths faster than law enforcement in the past.

One rumor surrounding the case is that Etute, a 2021 graduate from Frank W. Cox High School in Virginia Beach, got himself involved in some kind of catfishing scheme gone wrong.

Redditor Any-Cheesecake3166 writes, “None of the news articles mentioned Isi being with teammates and as someone who has spent almost every summer on campus as an RA, it’s RARE that you’ll find a freshman athlete, by themselves, off campus unless it’s some tinder hookup.”

Another Redditor, jaroneyy, writes, “I know Isi, he’s definitely not the type of person to do this. While I don’t want to assume anything, I have to agree that I don’t think Jerry was intentionally killed. Fortunately for Isi his family will be able to afford a good lawyer. No matter what happens all I can hope is that justice is served.”

jaroneyy also commented, “The current rumor right now is that Jerry catfished Isi through tinder and he got beat to death.”

Another person who claims to be familiar with the local scene, Redditor Bitchimnasty69, writes, “There’s been rumors that Jerry was the guy putting roofies in peoples drink at El Centro. Something tells me there’s more to this story than a simply murder.”

VTPR21, who claims to be “a Blacksburg townie,” shared even more alleged details that may or may not have played a part in the murder at Virginia Tech.

“I would like to offer some insight,” VTPR21 writes. “Jerry Smith, an openly gay man (nothing wrong with that), has been fired from local establishments for sexually harassing young men. I am a credible source, as I was a coworker at said previous establishment. Before this event took place, it was widely rumored that Jerry had been slipping drugs into students drinks at the local bar he worked at called El Centro Taco Bar. Not to speak ill of the dead, but stating facts, Jerry had a reputation as a predator.

“Knowing this information about the victim, it truly makes me curious as to what exactly occurred on the night of June 1st.

“El Centro, where Jerry was employed, has a very bad reputation in terms of violating ABC laws, not following CDC guidelines during the COVID pandemic, and for the past 8 months has been a hot spot for roofies. Additionally, rapes and other assaults have been reported at this location as well. With all of this, El Centro has never lost their ABC license, or faced any consequences that I am aware of. It makes you wonder, how are they getting by with all of this misconduct? Rumor has it, Jerry had ties within the Blacksburg Police Department.

“With this knowledge (understandably, speculation), I wonder how this investigation will be handled and if what truly happened June 1st will come to light.

“Regardless of what Jerry Smith may have been into, murder is a cruel fate and I am not saying he ‘deserved’ what happened to him. But I just wanted to share the information I have of the victim prior to the incident, as I feel like it is a crucial piece of this investigation.”

Redditor TaroRepresentative75 posed another question, “I have friends who have matched with a person posing as “Angie” who lives at this same down town address. an obvious fake tinder profile but always asked their matches to come over and have sex. Anyone else run into this same profile?”

“She added me on Facebook and would continuously message me asking for me to come over to her place on top of hokie mart for sex,” replied Redditor UsedWater3984. “And then like last week I received a friend request from who I thought was jerry because I already had his number in my phone but when I looked at the username it was actually this Angie woman.”

Redditor ripeworm answered, “His phone number brings up a snapchat account under the name angie renee.”

While another Redditor, RVAlurker, responded, “A Facebook profile for that individual based out of Blacksburg appears to be a legitimate person until you look at their friends list, which is some 1,100+ young men. Didn’t see a single woman. That’s very strange.

“Edit: And for more proof that “Angie Renee” and Jerry Smith are the same person, the laptop with the Vineyard Vines sticker on “Angie’s” couch for sale is the same laptop shown in Jerry’s August 7, 2016 Facebook post of a piece of pie.

“Edit 2: Someone over at thekeyplay knows and has contacted the real “Angie Renee”, who does not go by this name. Presumably this is a case of stolen identity for catfishing.

“Edit 3: It is now confirmed that the photos of the woman used for the accounts were indeed stolen.”

RVAlurker also claimed to have found a “second Facebook profile for the same individual is friends with almost 5,000 young men.”

Redditors also brought up numerous links between El Centro, Smith’s alleged employer, and reports of people being drugged, as well as claims that “multiple rape allegations that took place in their restrooms.”

One of the main questions being asked by the many internet sleuths is, why does an 18 year old freshman have a 40 year old “acquaintance” at a school he just started attending?

Based on these claims, and many more, this case appears to be one where there is much, MUCH more to the story. Stay tuned. (And follow this Reddit thread for more.)