These Are The ‘Must Have’ NFL Players You Need In Your Daily Fantasy Lineup To Succeed In Week 1, According To A DFS Expert 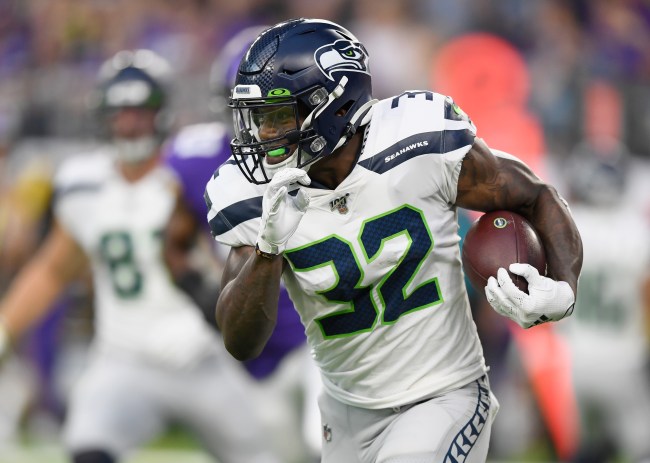 Welcome to the 2019 NFL Season.  At this point, everyone has the optimism that their favorite team can catch fire and get to the Super Bowl (except Dolphins fans) and more importantly, there are seventeen regular season weeks where we can all take a shot at winning some big money on DraftKings!

This year, we are going to have two articles per week, one concentrating on three players you need to highly consider in your lineups, and the other with three guys you need to avoid this week.

Let’s have a look at who you need in your lineup this week.

DraftKings always releases their salaries for week one over the summer, which always leads to some guys being mis-priced. Chris Carson falls squarely into this category. When we are looking for running backs to play, we want to find guys who are going to receive heavy volume, and in what is most likely, a positive game script.

With Brian Schottenheimer as the Offensive Coordinator for the Seahawks, Seattle is one of the run heaviest teams in the league. Rashaad Penny has underwhelmed in training camp for the second straight year, making clear that this is Chris Carson’s backfield.

With a week one matchup against the Cincinnati Bengals at home, as a nine point favorite, the Seahawks are likely to take an early lead, and never look back. As the game wears on, we can expect Seattle to grind down the clock, giving us heavy usage for Chris Carson. With a positive game script, and Vegas predicting the Seahawks as the third highest scoring team of the week, 100 yards rushing and a score seems to be a very likely outcome. And at only $5700, that’s a fantastic outcome for us.

Jacksonville’s got themselves a new Quarterback, inking Nick Foles  to a big deal in the offseason. Foles certainly represents an upgrade from the past few years of QB play in Jacksonville, so we can expect an improvement to the Jags offense.

This preseason, Foles appeared in one game, attempting ten passes.  A whopping seven of those targets were thrown to Westbrook, giving us a glimpse of things to come.  I fully expect Westbrook to become the “alpha” in this offense.

Facing a Chiefs defense that was lackluster against the pass, in a game with a high over under, we can expect there to be a lot of scoring in this one.  With the Chiefs being one of the best offenses in the league, we can expect the Jaguars to need to keep pace on the scoreboard. At such a discounted price, Westbrook should be able to pay off, with the upside to break the slate.

Along with the Chiefs and Seahawks, the Eagles are expected to be among the top scoring teams in week one.

Last year, Wentz appeared in 11 games for the Eagles. In 7 of them, he hit at least 23 DraftKings points.  That’s more than enough for what we are looking for out of the QB position at this price point. In general, I am always looking to find a QB who is cheaper priced with some upside, so I can fit studs in at the other positions. With the Eagles implied to score around 4 touchdowns against an abysmal Redskins team, I’m looking for Wentz to put up 18 points as a floor.