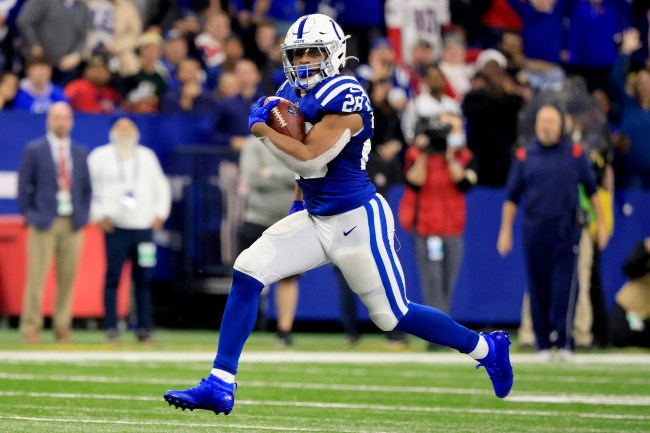 There have been several players this season who have put in performances that warrant consideration in the MVP race. However, it seems those around the league are mostly split between just Aaron Rodgers and Jonathan Taylor for the award.

Rodgers received 11 of the 23 votes while Jonathan Taylor received 8. The other 3 players receiving votes were Tom Brady with 2 and Justin Herbert and Cooper Kupp with 1 each.

This year’s MVP race is one of the more intriguing ones we’ve seen in recent years. Rodgers has been as ridiculously efficient as usual, throwing for 30 TDs with just 4 picks while sitting near the top of the league in both completion percentage and yards per attmept.

Tom Brady has the gaudy numbers that usually win MVPs. He leads the NFL in TDs and passing yards this season. Then we get to the really fun entrants in the race.

Jonathan Taylor has taken the NFL by storm in his second season. He has racked up 1518 yards and 18 touchdowns on the ground, which has put him well ahead of the rest of the running back field. He has also added another 336 yards and 2 TDs receiving while leading the Colts to a potential playoff berth.

Cooper Kupp has been equally ridiculous when compared to the rest of the league’s receivers. He is currently leading the NFL in receptions, yards, and touchdowns and doesn’t have anybody particularly close to him in any category.

We haven’t seen a running back win the award since 2012 and a receiver hasn’t won it ever. If there was ever a year we’d see a non-quarterback win, it would be this year.

With all 5 players receiving vote still fighting for playoff berths or playoff seeding, this race should provide plenty of excitement down the stretch.