Bill Belichick’s ‘My Cause, My Cleats’ Shoes For This Weekend Show His True Colors 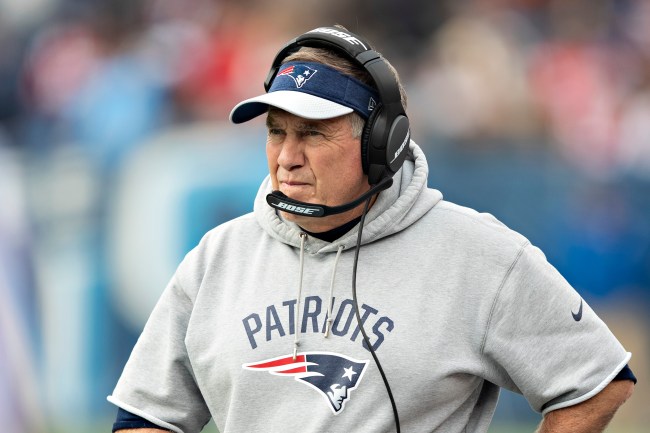 The “My Cause, My Cleats” campaign is one of those things that the NFL has done the past couple of years and has gotten an amazing response. As harsh as the league usually is on, well, everything, the fact that they allow players and now coaches to wear customized cleats/shoes for a charitable cause is seriously phenomenal, with those game-worn shoes then being auctioned off and proceeds going to the charity of the player’s or coach’s choice.

There are a lot of different designs out there that are really cool, but one that really got my attention was New England Patriots head coach Bill Belichick’s. The normally buttoned-up coach let loose a little bit with his sideline shoes for the “My Cause, My Cleats” campaign, going with a bunch of footballs wearing headsets and, even better, a lacrosse stick on the side of one of the shoes. Take a look below.

These are the sneakers Coach Belichick will be wearing on the sidelines this Sunday to support our cause. We will let you know how they could be yours after the game! Photo credit @Patriots pic.twitter.com/i2ZJAQPG1h

For those unfamiliar, Bill Belichick absolutely loves lacrosse, with the future Hall of Fame and Super Bowl-winning head coach talking about his passion for the sport tons of times over the years. Here’s a quick peek at Belichick talking about lax.

The head coach’s “My Cause, My Cleats” shoes this year will benefit his foundation, aptly named, The Bill Belichick Foundation, which, according to its official website, “aims to provide coaching, mentorship, and financial support to individuals, communities, and organizations. Focusing on football and lacrosse, its mission is to bring the values of the Belichick family — a love of sports, coaching and team building — to the athletic leaders of tomorrow.”

Sure, Bill Belichick might come across as an intense badass thanks to his military-like demeanor, but let’s never forget he’s truly a bro just like you and me. Here’s even more proof.

Belichick has always been a bigger bro than you. Deal with it. pic.twitter.com/jH3vSVLlKA

And, thanks to his “My Cause, My Cleats” shoes this weekend, we have even more reason to believe the guy is, deep down, nothing but a big softy.