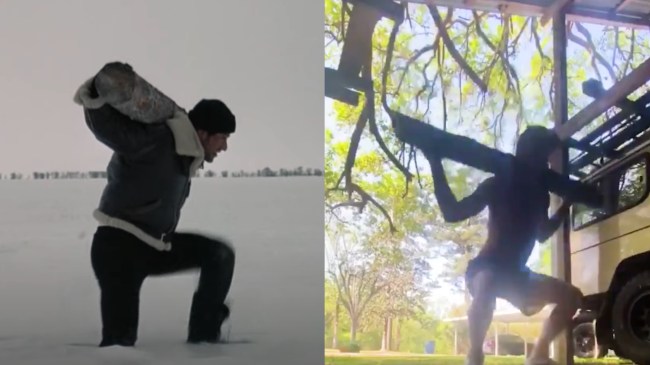 Myles Brennan has some enormous shoes to fill for the LSU Tigers whenever college football resumes. He’s LSU’s next quarterback and he’s taking over for Joe Burrow who just led the Tigers to an undefeated season, a National Championship, and he won the Heisman Trophy along the way.

In order to say at the top of his game for LSU during the quarantine period over the past few months, Myles Brennan’s parents helped him by setting up cones and trashcans with targets and a makeshift obstacle course at their home in Mississippi. Myles was able to use what they had on hand to stay in peak physical condition and that included one day realizing there was a chainsaw he could use to chop down some trees and train like Rocky in Russia ahead of his fight with Ivan Drago.

“My parents set up pretty much an obstacle course,” Brennan said. “So they had to have like, targets spray painted onto the trees. They had gone and bought these nets, they had cones set up, they had trash cans to throw balls into. Then I was walking across the property one day just cutting down trees, and just cut down that tree and just use that as, like, I could lift it and bench it and put it on my back and squat it and stuff.

“I just tried to make it the best with what I had.”

And that’s not even the slightest bit of an exaggeration. The dude chopped down a tree to throw it on his back for squats and press it. The weather might be different but the resemblance is there:

After returning to campus not too long ago, Myles Brennan sat down to discuss how he stayed in peak shape during quarantine and how ‘champions find a way’. Here’s that quick clip that’s under a minute:

I don’t think it’s unfair to say that virtually every guy who (1) works out regularly and (2) has seen Rocky IV has at some point in his life thought about what it would be like to chop down some trees and workout like Rocky before he fought Drago. It’s nice to see this dude out there living the dream in the offseason and at least making his home workouts fun.

In most of the 2020 preseason rankings, the LSU Tigers are ranked 5th which isn’t shocking after the Tigers lost Joe Burrow but most fully expect them to compete for another National Championship whenever we get back to a full season of college football, whatever that might look like going forward.